Fabiano’s Fantasy Focus: What to Watch for, Volume IV

There’s no fantasy football offseason on NFL.com! Be sure to check out NFL.com/Fantasy for in-depth analysis on all the news that will affect your fantasy team in 2014!

Each week during the season NFL Network and NFL.com Fantasy Football Editor Michael Fabiano joins Sports360AZ.com’s Brad Cesmat to share his insight on building and developing your fantasy team for success.

Here are some hi-lights from our most recent conversation (July 25th) with the Fantasy Sports Writer’s Association Hall of Famer.

What do you say to those people who want to draft their teams now?

“NFL.com has a ton of mock drafts. Do those if you’re so inclined because you can’t wait to do your draft. Mock drafts are a great way to practice, and you should be drafting your fantasy team in the last week of August or, at the earliest, the last week of the preseason. You know exactly what the depth charts are, and injuries are unlikely to happen in the fourth preseason game because most teams don’t play their stars.”

What do you think of Josh McCown as a fantasy quarterback this year?

“He was great last year: 13 touchdowns, 1 interception. When Jay Cutler went down, there was no downgrade in a fantasy perspective. McCown was just as good, maybe better. Here’s the concerns I have with McCown: he’s a journeyman quarterback, for all intensive purposes. He’s going from an offense that likes to throw the football to one that likes to run the ball a lot, and I don’t know that he wasn’t a product of Marc Trestman’s system. Trestman’s system is just perfect for a quarterback to succeed in the stat sheet. When Cutler was healthy, he was putting up some pretty good fantasy production, so you also couple in the fact that the quarterback position is really, really deep and Josh McCown may not even be drafted. He could be a waiver wire guy and match up as a starter. Who knows? I may be wrong, he may light the world on fire. He’s someone, to me, that’s no higher than a low-end QB2.”

Will these new play packages for Johnny Manziel add to his fantasy value?

“Well, you’re not going to be able to use Johnny Manziel unless he’s a starter. The talk about these packages is bad news because that means Brian Hoyer’s the starter. His greatest value in fantasy football is the fact that he can run with the football. At college, he averaged 15 fantasy points a game just as a runner. In 16 starts, I believe it was as a pro, Tim Tebow, who is not as good as Johnny Manziel from a skill perceptive, averaged about nine fantasy points a game as a rusher. So if you believe Manziel can give you nine points as a rusher and give you another seven or eight as a passer, you’re looking at a low-end QB1, high-end QB2 based on production. He has to win the job. If he does win the job, I would draft him late as a QB2 with upside.” 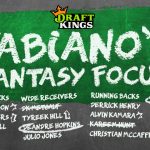