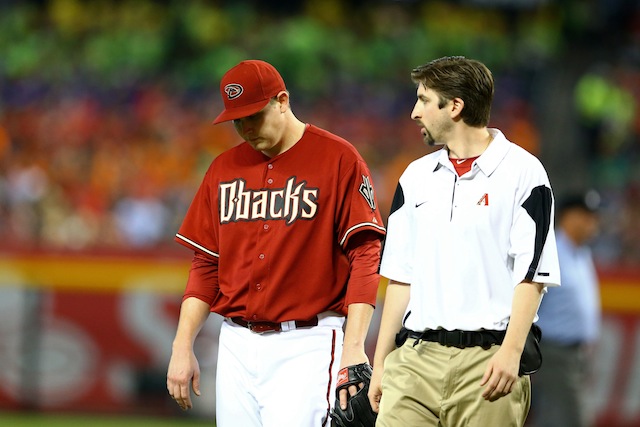 A common phrase you hear when talking to or about professional golfers.

The same can be said about baseball players, as well. Although America’s favorite pastime is a team sport, the mental grind from a long season can weigh heavy, especially when said underperforming player is carrying a hefty annual price tag.

The Arizona Diamondbacks announced earlier this week they designated the ineffective starter-turned-long-reliever for assignment meaning they have 10 days to either waive, trade, option or designate him to the minors. Regardless of what happens the organization is on the hook for just under $18 million. Further complicating matters is if traded Arizona would still end up eating most of his contract.

Some inside baseball circles believe Cahill’s struggles (1-6, 5.66ERA) can be more attributed to his mindset than his motion or mechanics and there could be hope ahead for both parties if the 26-year-old accepts the minor league assignment as he’s expected to.

#Dbacks Cahill indicated that he was open to accepting a minor league assignment.

“Mental things can be fixed,” ESPN baseball insider Pedro Gomez told Sports360AZ.com in a phone interview on Tuesday. “I know back in the 80’s Dave Stewart, who was mentally a mess when he was with the Dodgers, the Rangers, the Phillies and they all let him go. He got to Oakland, he got in the right situation…straightened him out to where he became a four-time 20-game winner, and MVP of the LCS, a three-time World Series champion.”

Others like former pitcher-turned-outfielder Rick Ankiel have also found success overcoming the mental hurdles of the game but every player of every example is unique to that particular situation.

“It’s not easy, the mental part,” Gomez explained. “It is a lot more difficult to get straightened out but it can be done.”

Justin Upton back in Arizona as a Brave

Derrick Hall: Hale To Be “Huge Success” With D-Backs