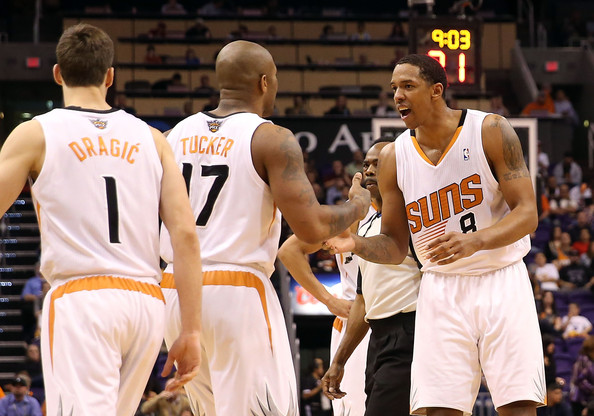 Last summer Phoenix Suns new general manager Ryan McDonough and head coach Jeff Hornacek set forth on a mission to change the culture on and off the court.

Their blueprint led to 48 wins and a renewed sense of identity for a franchise coming off its’ ugliest season in decades.

A year later they’re trying to prove it all over again with a handful of recent draftees and a to-do list of free agent needs, starting with two of their own.

One is power forward and fan favorite Channing Frye who announced recently he will test the open market becoming an unrestricted free agent. He’s joined by fellow forward P.J. Tucker (a restricted free-agent) who many feel, along with guard Goran Dragic, was the heart-and-soul of last year’s surprising success.

Channing Frye made it official. He won’t exercise a $6.8M #Suns contract option for 2014-15. He’ll be an unrestricted free agent on July 1.

Frye, a homegrown talent from St. Mary’s High School and the University of Arizona figures to be attractive to teams around the league because of his ability to step outside and shoot, as well as rebound.

“My gut feeling is [Frye] is gonna be back,” he told Sports360AZ.com’s Brad Cesmat in a phone interview Friday morning. “I think all our guys are going to be back. We love what they do for us. I think they all enjoy playing here…these guys played major roles.”

He said free-agents need to be careful before deciding their futures.

“You love to get courted,” he explained. “You love to hear that other teams want you. Ultimately…you never know what you’re going to get when you go to another team. It might not pan out.”