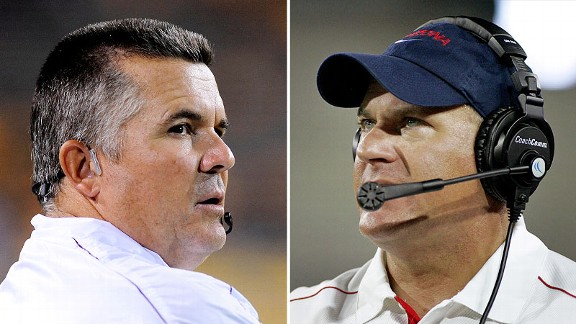 Traction can be a difficult thing to obtain in college athletics for coaches stepping into new situations.

Just don’t tell that to Arizona State’s Todd Graham and the University of Arizona’s Rich Rodriguez who are blazing their own trails as the leaders of the state’s two biggest football programs.

Graham has already led the Sun Devils to a Pac-12 South Championship while Rodriguez has guided the Wildcats to two consecutive bowl wins during his two-year stay in Tucson.

Their hard work and quick success have caught the attention not only here in-state but nationally, as well.

“I think it’s just ramped up,” long-time cbssports.com senior columnist Dennis Dodd told Sports360AZ.com’s Brad Cesmat in a recent phone interview. “I think the interest and the intensity is ramped up.”

Dodd spent an hour with Graham on-campus in Tempe last month talking about the state of the Devils’ program, as well as an all day, all-access experience with Rodriguez and his staff during the Wildcats’ national signing day back in February. He feels both programs have the stability as they did when the late Bruce Snyder paced the sidelines at ASU and Dick Tomey at UofA.

“I don’t think either of these guys are likely to leave anytime soon,” Dodd explained to Cesmat. “They’re recruiting well in a hyper-competitive league that I summit is pretty close, if not surpassing the SEC going into this season.”

It certainly appears the foundations are in place for some  closely contested Territorial Cup games and likely Pac-12 South Championships in the coming years.