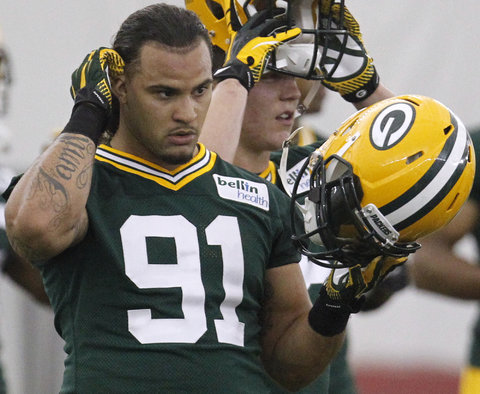 Despite bypassing his final year of eligibility to enter the NFL draft Carl Bradford and Arizona State University have a special bond.

Bradford came to Tempe a raw, unpolished fullback and linebacker and left an All-American with an NFL future and a college degree.

The former “Devil backer” became a Green Bay Packer when he was selected in the fourth round of last month’s draft. Even though he traded in the maroon and gold for green and gold Bradford isn’t about to forget the special bond he created with his alma mater.

“That’s what made me,” Bradford said of ASU during a recent phone interview with Sports360AZ.com’s Brad Cesmat. “That college. That university. I owe it all to them.”

The same can be said for head coach Todd Graham who took over after Bradford’s redshirt freshman season for Dennis Erickson who first recruited him to the desert. Graham utilized his speed, quickness and athleticism off the edge transforming Bradford into one of the Pac-12’s top defensive players over the past two seasons.

Congrats to @CarlBradford52 !! Great fit for him with the Pack! Proud of you!

He also helped Bradford prepare for the transition to the NFL and beyond with some simple words of wisdom.

“Coach Graham always stressed to be ready for success,” Bradford explained to Cesmat. “Whether it’s winning a big game or anything like that you have to always prepare it. So far I’ve been focused on that and learning how to deal with it.”

Bradford said he and his former head coach still keep in touch and Graham reached out after he was selected by one of the most successful and traditionally rich franchises in the league.

Cesmat asked if he sees himself coming back to Tempe.

Bradford agreed to a contract with Green Bay the day rookie camp opened in mid-May. He has been practicing at outside linebacker in  defensive coordinator Dom Capers’ scheme.