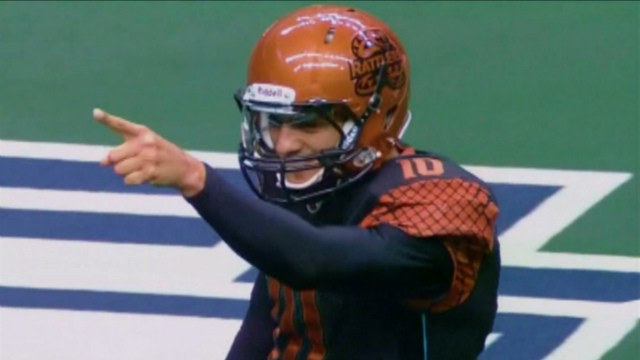 It was a night of some incredible accomplishments for the Arizona Rattlers on Saturday. They knock off their rival, the San Jose SaberCats 51-42 to tie the best start ever in Arena League history winning their 11th in a row and 15th in a row dating back to last season. The win clinches the West Division Title and a guaranteed home game for the first round of the playoffs, and above all, the team announced a major partnership moving forward with the Ak-Chin Indian Community.

Amongst all of that incredible news, the highlight of the night came from the face of the franchise who had not dealt with positive news for the past month. Quarterback Nick Davila’s father, Fernando Davila, had been battling ailments with his artificial heart for the past month and on Friday morning passed away. Davila did not practice all week to be with his family in Southern California and was a game-time decision for Saturday’s game with San Jose.

Though Davila was in uniform, Rattlers Head Coach Kevin Guy opted to not start his MVP-Caliber quarterback and go with a local product and Davila’s back-up, Jason Murrietta, who played at Ironwood High School in Glendale and has the all-time Touchdown record for Northern Arizona. Murrietta stepped in and along with impressive Rattlers defense, had a lead by seven going into halftime.

Murrrietta however would throw an interception which was returned for a touchdown on the first play of the second half and the result, Coach Guy gave the nod to Davila. Once the 12,094 in attendance saw Davila head to the huddle for the first time, he was greeted by them with a standing ovation.

The quarterback known as the Latin Laser was every bit of that nickname as he would go seven for seven combined in two possessions ending in touchdowns and the Rattlers would never look back. He finished the game going 15-19 for 136 yards and four touchdown passes. All four of which ended with Davila taking a knee and then pointing up to the sky at his Dad.

We have seen some incredible performances in the valley and on a national level of players competing with a heavy heart and exerting incredible performances. Tony Womack of the Diamondbacks after his father passed away, Brett Favre on Monday Night Football against the Raiders after his father passed away. There are not words to describe what the atmosphere was like in the US Airways Center when Davila took the field, but how he was able to get his team back on track and orchestrate four consecutive scoring drives with incredible rhythm against the best scoring defense in the AFL, it was truly a pleasure to witness and without a doubt a heroic effort.

That Rattlers in the midst of something very special this season in Downtown Phoenix. Yes they have already won back-to-back titles which has been special in itself, but they are in the process of having one of the most remarkable seasons in Arena League history. And leading the way, Nick Davila who is having an MVP season despite most of it being clouded by an off the field struggle for his fathers health which has now resulted in his passing.

Davila without question is becoming one of the greatest sports legends in the history of professional sports in Phoenix and this incredible performance despite unthinkable emotions made his legacy that much greater. It was truly one of the great moments that I can recall in sports in this town.