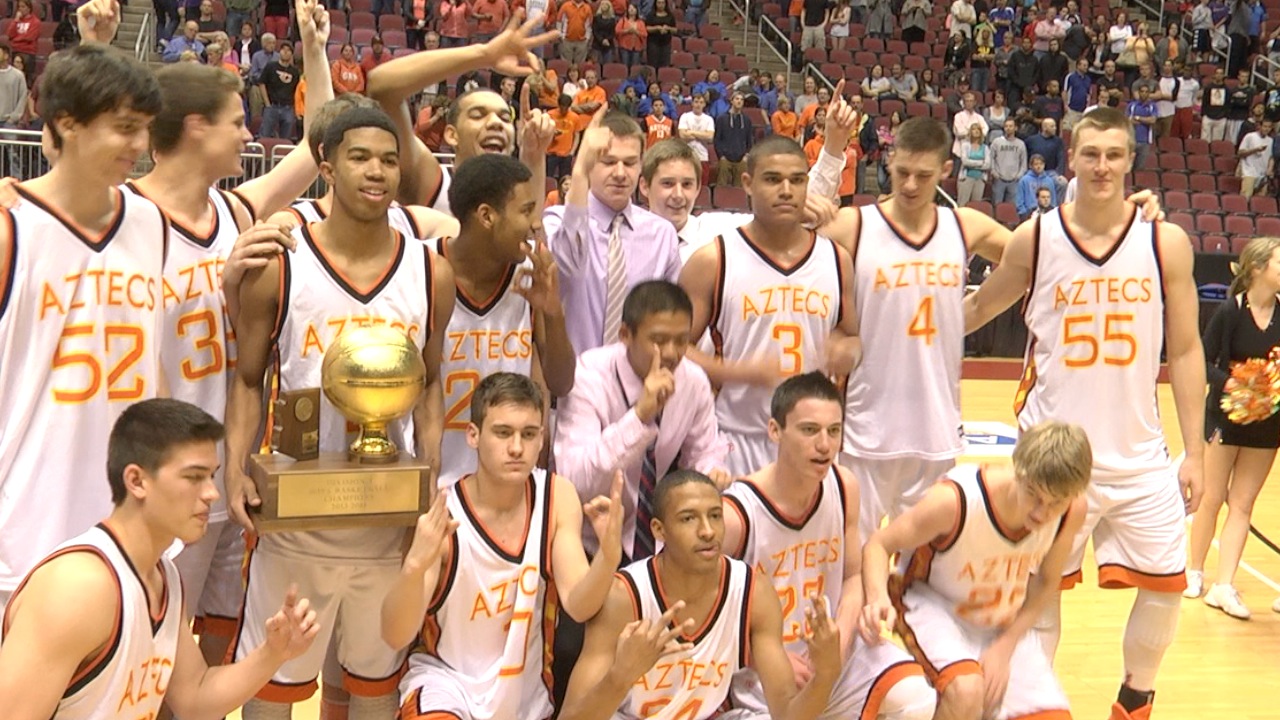 The 2013-14 high school sports season was as memorable as they come. It was a year that consisted of some of the best athletes this state has ever seen, some of the most memorable games and record breaking performances as well. The following are ten of the best storyline’s from the 2013-14 school year.

1. Class of 2014 football players: Arguably the best and deepest senior class of football players that this state has ever seen. A class that has really put the state on the map bringing in colleges that aren’t known to recruit here in the past. The class had the number one ranked quarterback in the nation in Desert Mountain’s Kyle Allen who is now already competing for the starting job at Texas A&M, his partner in crime and good friend Mark Andrews who is headed to Oklahoma, leading the way for Salpointe’s much sought after state championship was Arizona-bound Cameron Denson and another new state champion, Mountain Pointe got incredible play from Oregon-bound Jalen Brown. Overall the class has over 70 players that will be playing division I football at the next level. It will be fun to watch some of these players represent Arizona all over the country.

2. Pride state champs: After a number of very successful seasons under Head Coach Norris Vaughn, the Mountain Pointe Pride finally inked their first ever state championship for football in a convincing win over the defending champion Hamilton who beat them in the big game just one year prior. Nothing was getting in the way of the Pride in 2013. Not nationally ranked Bishop Gorman the first week of the season in Vegas, not anyone on their regular season schedule and not Hamilton who has stood in their way so many times in the past. This was not just the best team in the state, but one of the best in the nation and will go down as one of the best ever in Arizona history.

3. Veritas Prep’s Volleyball Superstar: What a year it was for a small school Volleyball phenom, Sarah Sponcil from Veritas Prep. Not only did she win her third state championship this year, she also won the two-player sand volleyball title in the North America Central America Caribbean Volleyball Federation (NORCECA) Central Zone Tournament which was played in Puerto Rico. She was teamed up with Zana Muno of Centennial and the two have now qualified for the Youth Olympic Games in Nanjing, China, from Aug. 16-28, 2014. Sponcil will be playing both indoor and sand volleyball for Loyola Marymount at the next level.

4. Class of 2014 basketball players: It wasn’t just the football class of 2014 that was as good as ever, this basketball class was as well. Seeing the last of Corona’s Casey Benson (heading to Oregon), South Mountain’s Zylan Cheatham (heading to San Diego State), Pinnacle’s Dorian Pickens and Sunnyslope’s Michael Humphrey (both heading to Stanford), Mountain View’s Payton Dastrup and Highland’s Jake Toolson (BYU bound) all just to name a few. These players have been players on our radar for quite some time and somehow exceed expectations each and every year. I am excited to see how far all of these guys go after college.

5. Corona 3-peat: Everyone knew that slaying the dragon that is Corona del Sol basketball this season was not going to be an easy task and in the end, it couldn’t be done. Casey Benson and Cassius Peat for the third year in a row were part of a state championship team with the Aztecs. Transfers Dane Kuiper, Connor MacDougall and freshman Alex Barcello were huge contributors to win their first with the team. Like the Mountain Pointe football team, this was not just the best team in Arizona, but also one of the best in the country. It wasn’t easy though. Coach Duane acknowledged how this team got the best shot from every opponent they faced and that was no more evident than in the state title game against Pinnacle which will easily go down as one of the best high school basketball games I have ever seen. Corona said goodbye to Benson and MacDougall in 2014. It will be a new look team but they still expect to be the team to beat in 2014-15.

6. Greg Haagsma gets 500th win: For just the 11th time in state history, a basketball coach notched 500 wins under their belt. Valley Christian’s head basketball coach Greg Haagsma did just in 2013-14. And what better a year to do it than during a season where he son was one of the star players and the team came away with a state championship. Haagsma will go down as one of the best boys hoops coaches in Arizona history when all is said and done.

7. Track Dominance: What a year it was on the track in Arizona. Mountain Pointe junior Paul Lucas had one of the fastest times in the nation in the 100, 200 and 400 meter dashes this year. As was also the case with Brophy senior Bobby Grant who was among the nation’s elite in the 200 as well as the 110 and 300 meter hurdles. Grant is taking his talents to South Beach to the University of Miami next season. And to finish with the boys, North Canyon’s Bryant O’Georgia won the state high-jump for the second consecutive year by setting a state record, clearing 7-2 and 1/4. For the girls, we start by  saying goodbye to Chandler’s Ky Westbrook who leaves for USC as a four-time state champion in the 100 and 200 meter dashes as well as the two-time shot put champion and added a state title in the 110 hurdles this season for good measure. And a great track story for long distance running came from Desert Vista’s Dani Jones who at one point was battling a tibia injury this season, wound up winning the 1600 meter state title in state-record fashion running a 4:48.73.

8. Red Mountain wins record 5th state championship in a row: We talk about the dynasty that Corona boys hoops has built over the last three years, but the best dynasty in Arizona after 2014 is the Red Mountain Softball team who won their fifth consecutive state championship this season which is a state record. What a career for long-time pitcher Bre Macha and catcher Jordan Beck who have seen success with one another long before they first stepped foot on the Red Mountain softball diamond four years ago.

9. Hamilton wins fourth state title in baseball: The Huskies under coach Mike Woods have had some incredible talent come through their team over the last couple years but no state titles to show for it. This year, the Hamilton Huskies put it all together and ultimately knocked off Mesquite to be state champions. Hamilton had a remarkable season losing just three games all season by a combined five runs. They had remarkable pitching from junior Zach Pederson and senior Kent Hasler who both threw over 60 innings going a combined 20-1. Hasler led the team with a remarkable 75 strikeouts along with a 1.59 ERA. It was the fourth baseball state championship in schools history.

10. The year of Catalina foothills: The Falcons from Catalina Foothills in Tucson won the most state championships of any school in the state with six this year. The titles included boys cross country, boys swimming, girls swimming, girls track, boys tennis and girls tennis. Then next most was Xavier who had four.