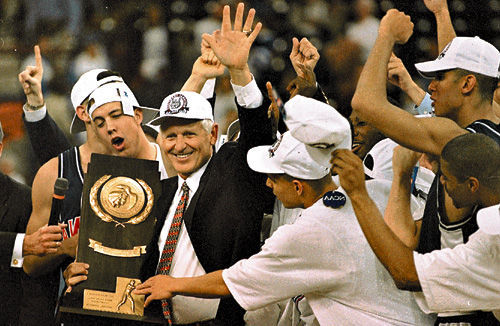 Lute Olson still has a passion for the program he helped build, even if his seat isn’t quite as close as it once was.

The Basketball Hall of Famer has a lot to like from what he sees from the top-ranked Wildcats who cruised into the Sweet 16 after dismantling a solid Gonzaga team Sunday night in San Diego.

“I think they’re the best defensive team in the country,” Olson told Sports360AZ.com’s Brad Cesmat in a phone interview Monday morning. “When they get the number of steals they got and breakaways for dunks [Sunday], they were just unbelievable.”

Unbelievable is a word many have used to describe the man who won 781 games during his career, including 589 in Tucson. He led the ‘Cats to a national championship in 1996-97.

He says head coach Sean Miller is well on his way to establishing his own legacy in the Old Pueblo.

“He’s always into what’s happening on the court,” the seven-time Pac-10 Coach of the Year said. “He’s very intense. If the coach is intense, you’re going to see intensity in his his players also…I just think he’s done a fantastic job of coaching this team. That defense doesn’t just happen. That’s something that’s worked on everyday.”

Olson believes this Wildcats’ team is much more than just a talented collection of players in an era where individualism is considered the norm in the modern era of college hoops.

“The great thing is they’re such a team in many ways,” he explained to Cesmat. “They’re together off the court. On the court they’re really supportive of one another.”

The 79-year-old can be frequently spotted inside McKale Center during the regular season and was in attendance for the Pac-12 Conference Tournament in Las Vegas, as well as the ‘Cats wins over Weber State and Gonzaga last weekend.

He stays busy by working part-time for the UofA Foundation, traveling around the country meeting with some of the schools biggest donors.

“The nice thing is I don’t have to ask him for money. I just work to improve the relationship between the UofA and the donors…I really enjoy this. It keeps me connected.”

Sports360AZ.com will continue to provide complete coverage with UofA throughout their tournament run which continues Wednesday in Anaheim.