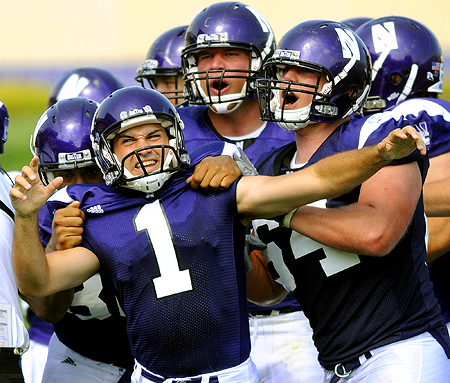 You like hearing about former Arizona High School players eventually getting the opportunity to one day be the head coach of a football program here locally. That became the case for two schools that announced head coaching hires over the last 24 hours.

The first that was made official on Monday was at Phoenix Christian High School where former Horizon Husky and Northwestern Kicker Stefan Demos had been named the head coach.

Demos graduated from Horizon back in 2006 where he was one of the top kickers in the state and went on the be the starting kicker for Northwestern in the Big Ten. He was also a standout soccer player for the Huskies in high school as well. Demos spent a few years kicking in the Arena League before retiring from the game and becoming teacher and football coach in Allen, Texas.

“I am extremely blessed and humbled by the opportunity to be named the Head Coach at Phoenix Christian,” Demos stated on Facebook. “PC is a school with such a tremendous spiritual, academic, and athletic tradition and I am very grateful to the administration for giving me this opportunity. I will be returning to Arizona in 2 weeks to get started building towards a championship.”

I personally know Stefan back from when he was schooling Elementary School kids on the soccer field and he was always one of the most athletic guys amongst his peers all growing up. He is one of the many reasons my soccer career ended before it even began.

The second hire that came down late Monday night was over at Scottsdale Preparatory Academy where they announced Jake Barro as the Spartans’ new Head Varsity Football Coach. Barro most recently spent time as an assistant under Jim Jones at Mesquite and was an assistant at Seton Catholic before then as part of the team that defeated Blue Ridge in the 2012 Division IV state title game. Barro played high school ball locally at Red Mountain and eventually landed his first coaching gig at his alma matter then under Jim Jones as well.

Barro’s family has a history of coaching. His grandfather Angelo Barro was a legendary coach in the Chicago, Illinois area He moved to Arizona where he ended his coaching career at Corona Del Sol and Marcos De Niza. Jake’s father Ken Barro was a very successful coach in both Arizona and California.

The Spartan players were introduced to their new coach on Tuesday for the first time.