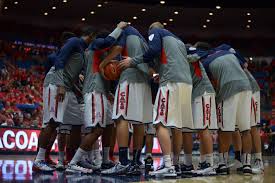 To say the cruise control was knocked off in Berkley, California, the night UofA lost their first game and more importantly, versatile forward Brandon Ashley would be an understatement. Although the ‘Cats have only lost once (a double overtime setback to Arizona State) since Ashley was shelved for the year the early-season 25-point blowouts have turned to last-second nail biters like Thursday night’s overtime win at Utah.

Don’t be mistaken into thinking opposing coaches or fans feel any pity for Miller, who’s 24-2, 11-2 team is still the best in the Pac-12 and expected to be a top-seed in the NCAA tournament barring a late-season collapse.

Still, there are questions, whispers about the impact of Ashley’s loss moving into March. Can they improve their scoring? Can the depleted bench contribute enough to make an impact? Will UofA ever become a good free throw shooting team?

One of their own isn’t so sure.

The loss of the multi-talented sophomore stretches far beyond the obvious.

“Brandon Ashley to me was arguably their best player,” he said. “He made shots down the stretch. He was a great defender. That always comes into it with his length.”

Elliott knows the road won’t be easy and they likely won’t be able to waltz through the first weekend of the tournament as many expected before Ashley’s injury.

“They’re going to have their work cut out for them,” Elliott said. “[They have] a lot of great tools with [Kaleb] Tarczewski and Nick Johnson and like Rondae Hollis-Jefferson.”

The former John R. Wooden Award winner and two-time All-American believes the one constant which hasn’t changed is the tremendous defense the ‘Cats are playing under Miller and his staff. Even when the offense has sputtered, UofA has been opportunistic enough at the defensive end and on the glass to win three of four since the loss to Cal earlier this month.