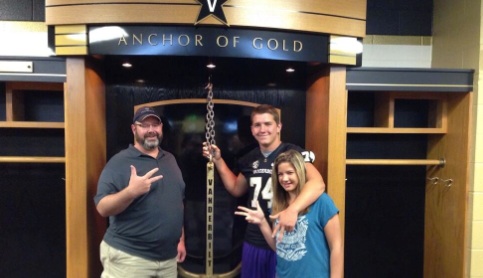 Of the top prospects in Arizona, the only one left to announce where he was going to play football at the next level was Sabino offensive tackle Andrew Mike.

On Monday, he announced his commitment.

Thank you to everyone throughout the process, I have decided to commit to Vanderbilt University #AnchorDown pic.twitter.com/mzYTrg0Bq5

The 6-7 star out of Sabino had been highly recruited out of Tucson for much of his high school career. It was looking for a while that a Pac-12 school like Arizona or Washington would be there in the end but toward the end of his recruitment, some SEC schools like Vanderbilt, Arkansas and Florida made a strong push.

In the end it was Vanderbilt that Mike chose where not only will he be playing in the SEC, he will also get a great education.

Two members of Sabino from the 2014 class will be playing major college football after high school now. In addition to Mike, teammate Matt Bushman, who was regarded as one of the top tight ends in Arizona, will be playing at BYU.