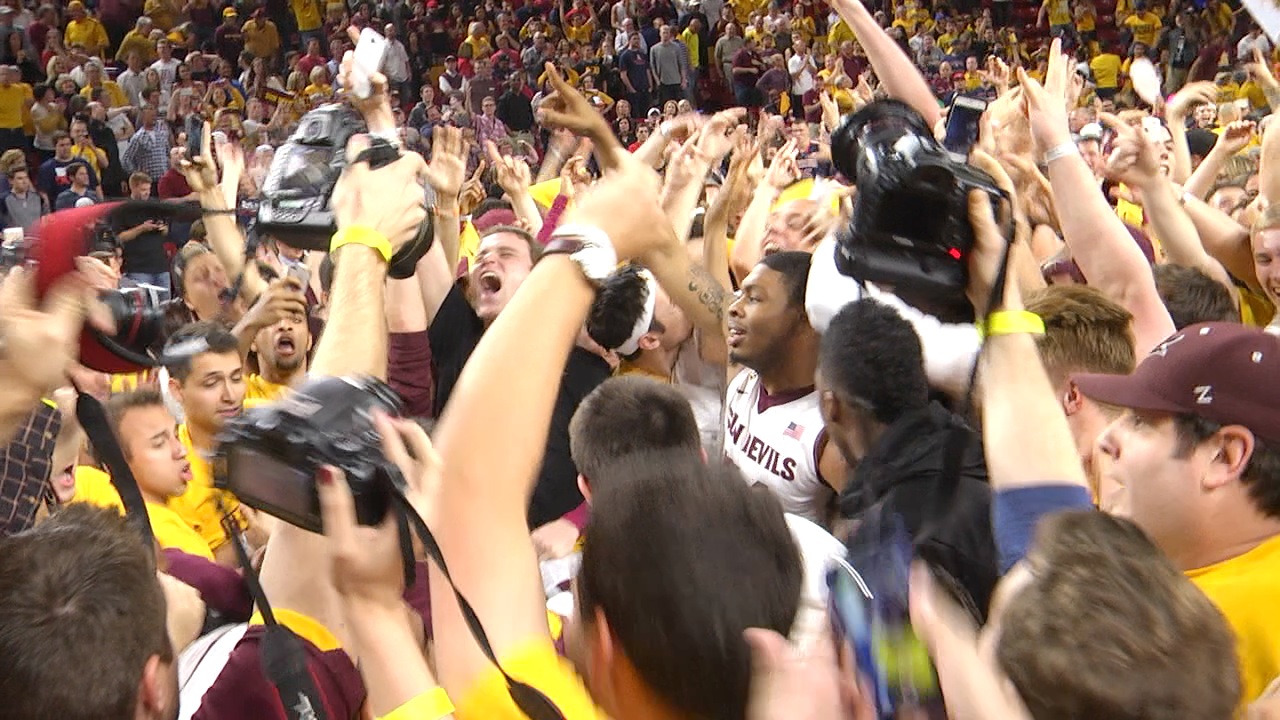 Herb Sendek and his Arizona State basketball team made history Friday defeating second-ranked and in-state rival Arizona 69-66 in double overtime in front of a raucous, sold-out crowd at Wells Fargo Arena in Tempe. The Sun Devils had never beaten a higher ranked team at home in program history. With the win ASU improves to 19-6, 8-4 in Pac-12 play. The Wildcats drop to 23-2, 10-2.

1. Marshall, Marshall, Marshall! After missing the first meeting in Tucson against the ‘Cats with a groin injury, senior Jermaine Marshall made his presence felt scoring a game-high 29 points, many coming in key points with the game hanging in the balance or the Devils against the ropes in overtime. The Penn State transfer made four three-pointers and added five rebounds in 45 minutes.

2. Welcome to Block-chynski Party 2.0: So this is what Jordan Bachynski does for an encore. Six days after saving the game against Oregon, the 7’2 senior thwarted T.J. McConnell’s potential game-tying lay-up in the closing seconds of double OT leading to Jahii Carson’s second dunk of the night and ultimately the sweetest of Valentine’s Day endings for the maroon and gold. The reigning Pac-12 Player of the Week defended the basket again swatting away eight total shots. His balanced game also included 13 points and seven rebounds.

3. Cat-tastrophy at the line:  Easy for Sean Miller to look at the box score and notice the 14 missed free throws in what has been an Achilles’ heel for UofA all season. Besides shooting barely 50% from the line (16-30), the ‘Cats struggled early and often from the field connecting on just over 35% for the game. The Devils weren’t much better making 15-26 (57.7%) from the stripe.

5. Punch the Ticket: It would be an understatement to say Sendek needed this one. The Devils improved their non-conference slate last off-season in hopes of enhancing their resume. Friday’s win likely win do a lot more. If ASU were “on the bubble” before the game, they’re certainly off it now. Beating an elite team like UofA, on national television no less, should cement their place in March Madness if they merely hold serve until Selection Sunday. Further, the Devils have won six of seven since getting drilled in Tucson last month. The committee likes to see teams peaking at this point down the home stretch of the league schedule.