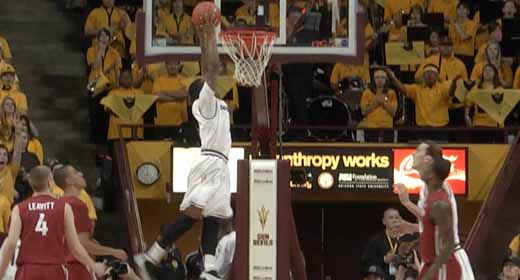 For the Arizona State redshirt sophomore point guard things haven’t always gone as smoothly as he had hoped but not all is lost for himself and the Sun Devils who find themselves in the top half of the Pac-12 standings and a legitimate contender to reach the NCAA tournament for the first time in five years.

Carson, who announced last April this will be his final season in Tempe, has broken through his mid-season slump and propelled the Devils (16-5, 5-3) back into contention riding a three-game win streak heading into Saturday’s game against Stanford in Palo Alto. Quite a change from earlier this month when ASU was reeling following an unexpected home loss to Washington and a lopsided 23-point loss to Arizona in Tucson.

“I think the slump that we had, myself and my team is over with,” Carson told Sports360AZ.com’s Brad Cesmat Friday. “I think that we came together as a team and flushed [out] the negative energy and started playing for each other instead of individually…I think we’re going to continue to play better basketball and the best is yet to come.”

The former Mesa High star has struggled at times from the field as teams continue to clog the lane and dare him to shoot from the perimeter. The results, to this point, have been mixed. Carson insists the only pressure to perform comes from himself, not his coaches, teammates or critics who have whispered he may be better off staying at ASU to refine his jump shot and all-around game.

So is he having second thoughts about committing to turn pro? Doesn’t sound like it.

“I really don’t care what anybody outside says about me wanting to stay another year,” he explained. “They’re not the GM’s or the NBA scouts…when things are going right, things are going good people are on my side. When…I’m not playing my best people want to criticize…I just stick with the people who have been loyal to me and that are going to have my back, regardless.”

The Sun Devils certainly have Carson’s back and, at least for the rest of this season, they have his.