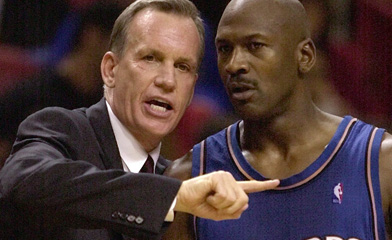 ASU basketball is at the beginning of what will be very difficult Pac-12 season. Especially this week with the SoCal road trip ahead of them.

Before leading for Los Angeles, the Sun Devils were paid of visit by a former first pick overall from the NBA draft, four-time NBA All-Star and head coach of four NBA teams, Doug Collins.

Collins is a frequent visitor to ASU practices because of his close relationship with Herb Sendek and is providing great insight to the players as they enter what Jahii Carson calls, “the peak of their season.”

“He’s always telling us keys to make our team better,” mentioned senior forward Jermaine Marshall. “Obviously he knows the game, he’s also a great mentor for Coach Sendek too so it’s great having him around.”

“Whenever you can get a guy with 40 plus NBA years, it’s invaluable to get as much coaching as possible,” added ASU center Jordan Bachynski.

Collins coached many greats in the NBA including Michael Jordan, Scottie Pippen, Grant Hill and Joe Dumars. For a players looking to break into the NBA after this season, the former coach is coming to the aid of both Carson and Bachynski.

“Just slowing down in the post,” Bachynski said. “Especially this past game, when catching the ball on the block, I would move and then get in trouble. So he will just talk to me about catching the ball first, slow down, assess the situation and go.”

“Whenever he’s in town he likes to get in my ear and whisper a couple of things to me,” mentioned Jahii Carson. “He’s been telling me that I need to make more of a mark. Especially now during the peak of the season that I need to be more aggressive and more of a leader out there on the court. He explains that next level guys, there are pit bulls everywhere so he is telling me to be a better, bigger and stronger pit bull out there.”

After a tough start to Pac-12 play against Washington, ASU got back to their non-conference ways against Washington State on Saturday. They will hope to ride that momentum along with the insight from Collins who dropped in this week to aid them in success vs. USC and UCLA.