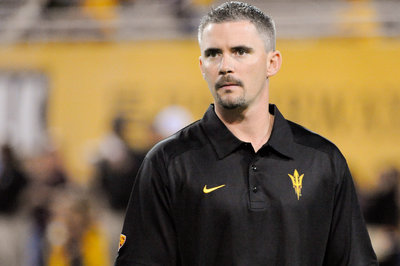 Arizona State offensive coordinator Mike Norvell is on the radar for the head coaching position at Arkansas State. A source told me Monday night Norvell was contacted over the weekend by A-State reps to gauge his interest in the position.

In his two seasons at ASU the Sun Devil offense has turned into one of the most prolific in the nation, rolling up almost 7,000 yards during the 2013 campaign.

I spoke with one Arizona State observer Monday night who thought Norvell would be better served to wait and see what Texas A.D. Steve Patterson does with the head coaching job for the Longhorns. Would Patterson encourage the new coach to pursue Norvell to be the OC for the Longhorns?

I thought Norvell would be a good fit for the opening at Boise State, but that position has been filled. It’s just a matter of time before he leaves the Sun Devils to run his own program. The question is, would going to Arkansas State be the best move for Norvell to get his head coaching resume off and running?