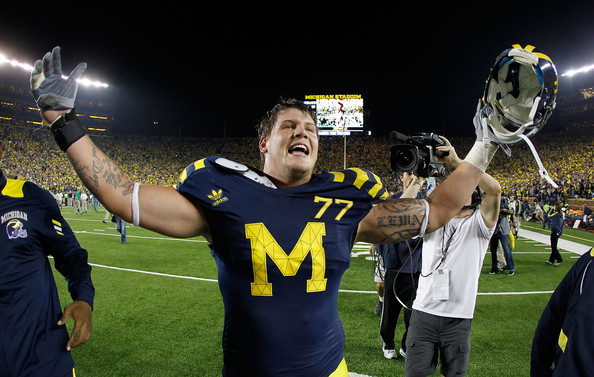 It is funny how life can take a person full circle sometimes.

Not long ago, Taylor Lewan was one of the most highly touted prospects out of Chaparral high school. He finished his career as a Firebird at Sun Devil Stadium in the Arizona state championship game.

Now five years later as a senior for the Michigan Wolverines, Lewan will complete his collegiate career in a familiar place, Sun Devil Stadium in Tempe, AZ for the Buffalo Wild Wings Bowl. And by the way, he and his Wolverines are practicing leading up to the game at Chaparral as well.

“It’s crazy practicing at my old high school and finishing my career at ASU’s stadium,” Lewan said. “I have so many people going, so of which I don’t even know but they said they wanted to go so I said I can get you a ticket…It’s great to be home, it’s great to be here, there is nothing like Arizona.”

The total tally just days before kick-off is 60 tickets that Lewan has reserved for family, friends, and yes, people he doesn’t even know.

A lot has changed over the course of five years at Michigan for Lewan. None more so than his ability to be an NFL prospect.

Lewan is a player that could have left Michigan early. He was a first round grade for the NFL Draft in 2013 but decided he wanted to stay for his final year of eligibility. That decision has proven to be a good one.

“I think he played his best football number one this year,” mentioned Michigan head coach Brady Hoke. “That was from his maturity…There’s no question that he’s done a tremendous job.”

“My biggest thing this year was being consistent,” Lewan added. “I think that I think I did really well this year is playign consistent, playing with good technique, fundamentals and taking these tools that I’ve learned and sharpening them.”

After Saturday’s appearance in the Buffalo Wild Wings Bowl against Kansas State, all focus leads to the NFL Draft where once again, many believe Lewan is projected as a first round pick.