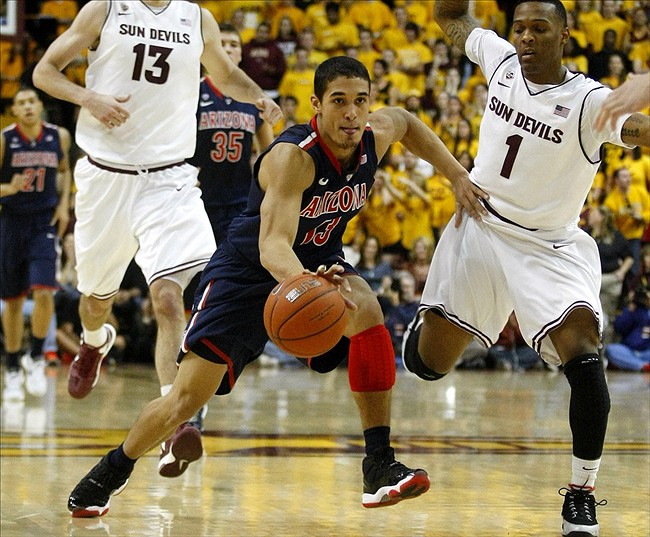 Growing up together in the east Valley Jahii Carson and Nick Johnson became fast friends playing both against one another in high school and together on AAU teams and the club circuit before one ended up at Arizona State and the other 100 miles south at the University of Arizona.

Now the redshirt sophomore Carson and the junior Johnson are on a mission to take their teams to the next level this season.

Both are unbeaten (ASU 4-0, UofA 5-0) and each are coming off impressive performances. Carson scored 40 points on 16-25 shooting and added seven assists in the Sun Devils road win at UNLV while Johnson netted 20 points and 10 rebounds in the Wildcats blowout of Rhode Island Tuesday.

Carson seems to have picked up where he left off his freshman season when he tinkered with the idea of turning pro after just one season of play in Tempe. He’s averaging 24 points per game.

“He can get past anybody, just about any defender,” long time Sporting News college basketball insider Mike DeCourcy told Sports360AZ.com in a phone interview Wednesday. “No one has the ability to attack the lane at a higher level in college basketball than Jahii Carson.”

Meanwhile down in Tucson Johnson (16.8 points per game) and the ‘Cats are thinking big and why not, with a nice blend of young and experienced players Sean Miller has to work with including one of the top freshman in the nation in wing Aaron Gordon.

“They’re certainly a terrific team in terms of what they bring to the table from a talent standpoint,” DeCourcy said about UofA who advanced to the Sweet 16 last season before suffering a close overtime loss to Ohio State. “I know they’re still somewhat young as [their] key players are sophomores and one is freshman but when you got guys that have actually played before you’re an experienced team now. They’ve got two sophomores that started last year (forward Brandon Ashley and center Kaleb Tarczewski) that means they’re better.”

There’s no disputing teams with excellent guard play are best equipped to handle conference and post-season tournaments so Miller and ASU’s Herb Sendek have to feel confident which each having excellent, experienced leaders come crunch time on the big stage.

ASU’s next big non-conference test is Monday when they host Marquette (3-1) at Wells Fargo Arena. The ‘Cats face Drexel Wednesday in the NIT in New York.