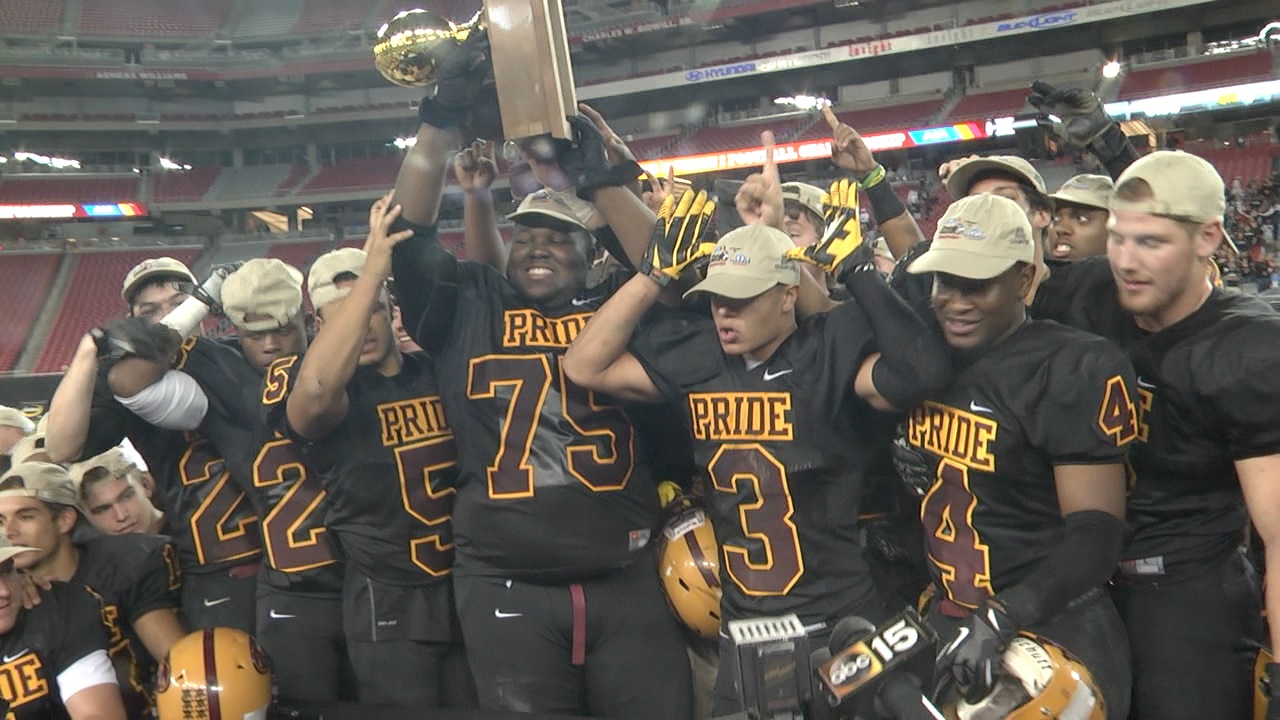 Walking around the Mountain Pointe sidelines this season, you would see fans wearing shirts with that said “unfinished business.”

After a masterful 2013 season for the Pride, they finished their business on the field Saturday at University of Phoenix Stadium, avenging their 2012 state championship loss to Hamilton by this time beating the Huskies 42-19.

“Our kids played great,” said Mountain Pointe head coach Norris Vaughn after the game. “Our kids played really good defense. Our quarterback was incredible and our receivers made a lot of really big plays.”

“It started since the first practices and spending the night at school,” added senior running back Wesley Payne. “It all started from there and I am just so happy to have this team. I wouldn’t have any other.”

Hamilton got off the the fast start. They did what they had done all throughout the playoffs and gave the rock to their work horse Tyrell Smith. He powered in for a touchdown that game Hamilton an early lead and carried the leas through the first quarter.

But the Pride would settle in. They would perfectly execute a halfback touchdown pass from Wesley Payne to the playmaking Jalen Brown. It seemed a sleeping giant in the for of the Mountain Pointe offense had woken.

“I am in complete awe,” Brown said after the game. “I feel so relieved, so blessed and so happy. We finally got it.”

Pride quarterback Antonio Hinojosa put together a fantastic game. After rushing for a touchdown to give his team a 14-7 lead, he would start finding some of his other great targets in Emmanuel Butler and Timmy Hernandez on frequent big plays. The Pride had a 21-7 lead at halftime.

Hamilton would come out in the second half like champions do, with a lot of fight and determination to make a comeback. A punt return for score by Melvin Kroma would bring the Huskies within one score late in the third quarter.

“Sharing this with my boys, my family,” mentioned Lucas. “That’s what made it special for me. Just sharing it with them.”

It was all Mountain Pointe from there, and a gatorade bath for Coach Norris Vaughn who brings the first ever football state title to Mountain Pointe and ears his first ring after many successful coaching seasons in Arizona since moving to the state from Georgia.

“I am proud for our community,” mentioned Vaughn. “I’m proud for our kids. They are better people than they are people and we have some great players. I am really proud for Ahwatukee.”