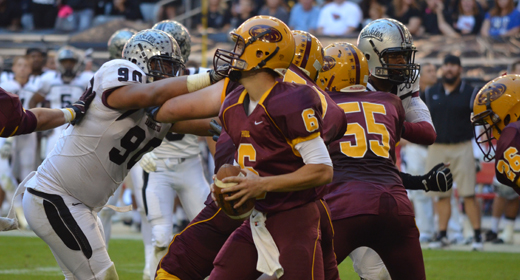 Saturday will be the sequel.

For the second consecutive season, the Mountain Pointe Pride and Hamilton Huskies will battle for the state championship in the highest level of football in Arizona. Last season, it was all Huskies. Hamilton won it’s 10th state championship with a 31-16 win over the Pride.

Also for the second consecutive season, the two faced off during the regular season with the Pride coming out victorious. In the 2013 season, Mountain Pointe won 37-27 in a game that was dominated by two very good rushing attacks. The Pride’s breakout junior back Paul Lucas had 148 yards rushing on 15 caries and a touchdown. For Hamilton it was their work horse Tyrell Smith (video interview posted below) who had 155 yards rushing on 24 carries. Running the ball and stopping the run will be critical for both teams to come of the game as state champions.

Mountain Pointe OG Natrell Curtis vs Hamilton DT Garrett Rand: This is one big boy matchup in the trenches when the Pride has the ball. These are two of the most athletic big men the game of football has to offer in Arizona. The two should be going at it for much of the game it will be a lot of fun to watch.

Mountain Pointe LB Wesley Payne vs. Hamilton RB Tyrell Smith: Payne is one of the best all-around football players in the state. His presence will be felt on offense when he lines up at running back but as mentioned, stopping Hamilton’s rushing attack will be key. So for Payne as the Pride’s leading tackler at the linebacker position, he will need to contain Smith and prevent the Huskies from being able to dictate the pace of the game with long methodical drives with a steady does of five to six yard runs by Smith.

Mountain Pointe QB Antonio Hinojosa vs. Hamilton QB Sam Sasso: Both quarterbacks will not blow you away on the stat sheet but both are vital to the success of their offenses. The quarterback that best manages the game, makes key throws in key situations and doesn’t turn the ball over, will have their team in the best position to win.

#3 Hamilton and #1 Mountain Pointe kick-off from University of Phoenix Stadium on Saturday at 3:30pm.