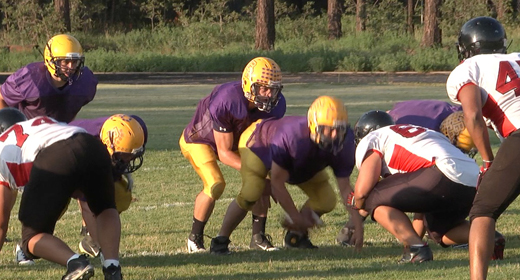 It is hard to believe that we are just two weeks away now from post-season football in Arizona.

As the season continues to roll along, more incredible story lines continue to develop.

Standing at the forefront is news that came down from the white mountains on Friday night. As first reported by Dave Zorn on the AIA Friday Night Wrap up show, legendary Blue Ridge high school football coach Paul Moro will not be back as the head coach after this season.

Moro has more than 300 wins in his 30+ years as the head coach for the Yellow Jackets. They are 6-2 on the season after a 47-0 win over Globe on friday night. A week ago they fell to rival Show Low for the first time in three meetings. It will be very different seeing the boys in purple and yellow suiting up without Moro next season. I will be curious to see if he makes his way down to the valley for a coaching job.

Watch out for those Highland Hawks!

A team Jason Jewell and I pegged as a sleeper team going into the 2013 season is now 6-2 on the season after a 24-21 win over the Basha Bears. Basha is coming off of an emotional loss to Hamilton in which they led late in the fourth but fell just short. The Hawks up until week 8 had beaten the teams they were supposed to beat but fell short in hard fought games against Queen Creek and Mountain View. Getting the win over Basha opens the eyes now to everyone in the state.

Coach Wahlheim and his Hawks now will look to continue this momentum into a battle next week against the Hamilton Huskies. Will definitely be a keep to an eye on next week.

As for Basha, up next they take on the Chandler Wolves, who rolled through the Perry Pumas friday night. Bryce Perkins has been one of the top quarterbacks in the state this season and had one one of the best moments of this 2013 season as he hit teammates Dionte Sykes for the eventual game winning touchdown over Hamilton. But dare I say that there could be a quarterback controversy at Chandler next fall?

Perkins will be a senior in 2014 and his backup, six-foot-three inch Mason Moran will be a junior. Moran has seen a lot of reps under center the last two weeks with Chandler pulling away early the last two weeks so we have had the chance to see Moran in action. He looks very impressive. Before Friday night’s game, Perry coach Preston Jones mentioned to me that Moran might be just as good as Perkins. Later when I asked coach Shaun Aguano about Moran, he mentioned to me that Perkins is their guy but Moran will not make his decision easy next fall.

Either way, Moran will get his shot as the starter for the Wolves as a senior once Perkins graduates, but the way Moran is playing now in garbage time, his starting role could come closer than many might think.

Once again, another team that quietly is putting together another fantastic season is Williams Field. Coach Steve Campbell has his team one of the top in division III year in and year out and it is no different in 2013. Coming off of a loss to Saguaro last week, a game which saw them come out slow and be down by as much as 24 but closed the cap to two before the end of the game, the Black Hawks bounced back with a vengeance, knocking off the defending champion Queen Creek Bulldogs 42-17 on friday night.

Division III has as much parity as any division in the state with Williams Field along with Saguaro, Desert Edge, Queen Creek and also a sneaky team in Shadow Ridge who the Black Hawks face next week.

Lastly, congratulations to South Mountain for snapping a 30 game losing streak on friday night in their win over Apache Junction!