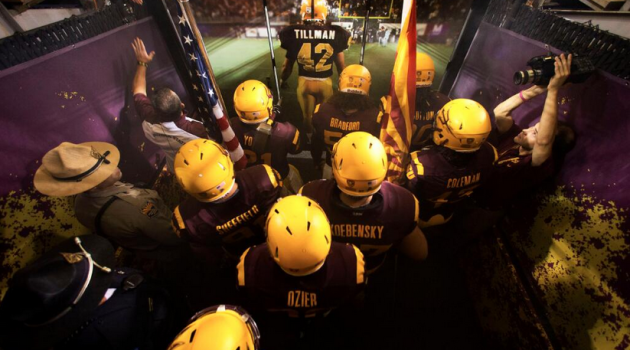 It’s what every conference strives for in college athletics. You could say it represents the Pac-12 well this fall as the season hits the halfway point. The Pac features seven teams in the top 35 (four in the Top 25). One of those is Arizona State (4-2, 2-1) who will have their hands full with 20th-ranked Washington (4-2, 1-2) at Sun Devil Stadium Saturday afternoon. The Huskies are coming off back-to-back losses to conference heavyweights Stanford and Oregon.

Even the man with the BCS crystal ball can’t seem to get a read on where Todd Graham’s Sun Devils will end up when the dust settles in December.

“The Pac-12 is a tough conference,” ESPN college football insider Brad Edwards told Sports360AZ’s Brad Cesmat in a recent phone interview. “I can see, at this point, [Arizona State] going anywhere from 9-3 down to 6-6. There’s going to be so many toss-up games left on that schedule.”

Edwards says the Devils are tough to figure out, particularly on a national level because what you see isn’t necessarily always what you get.

“I think it’s a lot of inconsistency by ASU,” Edwards said. “I think they are capable of being a really good team when they play well. It’s just a matter of them putting it all together.”

He has ASU projected to play Fresno State in the Royal Purple Las Vegas Bowl.

The Tostitos Fiesta Bowl is also a crapshoot at this point since they’ll have the final selection of at-large teams to face the Big 12 champion but Edwards believes there’s still a strong possibility for a quality matchup in Glendale.

If a non-AQ school like Fresno State or Northern Illinois qualifies they’ll almost certainly headed to the Fiesta Bowl.