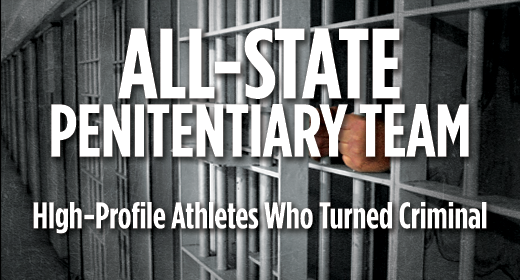 There is a group of notorious professional athletes whose accomplishments on the field were tarnished by what happened off the field.  As my on-going “tribute” to murder suspect Aaron Hernandez, formerly of the Patriots, I devised this list.  Counting down from number 10, we have finally reached the top two.

So here is the final installment of my five part series, which I called my “All Time State Penn (Penitentiary) Team” along with the last member of the Dishonorable Mention List.

Mike Tyson had the power and viciousness to score a knockout at will, but he often found that he was on the receiving end of one of his destructive blows.  In some ways, he is noted for how he self-destructed.  In other respects, his is actually a story of defeating the odds and rising above every obstacle that life set in his path.

Tyson was born in Brooklyn (my hometown).  His father abandoned his mother and Mike right around the time of Tyson’s birth.  Believe it or not, it was downhill from there for the majority of Tyson’s childhood.  Reports are that by age 13, Tyson had been arrested 38 times.  He was destined to die on the mean streets of New York well before ever establishing any life dreams for himself.  Then came the death of his mother when Tyson turned 16, and the life-saving guardianship by long-time boxing manager/trainer, Cus D’Amato.

Somehow, D’Amato was able to harness the raw power and rage that was within Tyson and turned him from hoodlum to stardom.  He was undefeated as a boxer under the tutelage of D’Amato, but that stewardship came to an abrupt end when D’Amato passed away in November, 1985.  It is clear that Tyson progressed to an elite boxing status even without D’Amato but it is likely that D’Amato’s death made the eventual derailing of Tyson’s life inevitable.

In his first 28 undefeated professional bouts, Tyson scored 26 knockouts, with 16 occurring in the first round.  Tyson holds the record for being the youngest fighter ever to simultaneously hold the WBA, WBC and IBF Heavyweight Titles.   However, after numerous successful title defenses, Tyson lost to prohibitive underdog Buster Douglas in a fight that took place in Tokyo with virtually no viewership in the United States.  It is to this day considered one of the greatest upsets ever in sports.  This came on the heels of legal problems, including an assault conviction that lead to Tyson being incarcerated for nine months.

After the Douglas loss, Tyson began winning again and was on target to regain all three titles.  But before he could do so,  he was charged with and convicted of rape.  In 1992, he began his three year prison sentence.  Once released, Tyson returned to the ring.  While he regained the WBC and WBA titles in 1996 fights, he lost to Evander Holyfield in November of that year.  They then had a rematch in 1997, which has gained infamy as the fight in which Tyson bit off part of Holyfield’s ear.

For years thereafter, Tyson tried unsuccessfully to regain his elite status, but eventually retired in 2006 with a record of 50 wins against 6 defeats.   Near the end of that career, Tyson was quoted by USA Today as saying “My whole life has been a waste – I’ve been a failure.”

In 2007, he was convicted here in Maricopa County of possession of cocaine and DUI.  Before sentencing, he had checked into a drug rehab facility and this contributed to him avoiding the one year in jail that had been urged by the County Attorney’s Office.   By then, this behemoth of a man who was feared in and out of the ring had gone through bankruptcy and had virtually no marketable skills.  Estimated earnings that exceeded $250 million were gone with little to show for it.  Despite a few high points, such as cameo appearances as himself in the Hangover film trilogy,  Tyson was for all intents and purposes back to being the Brooklyn boy before Cus D’Amato’s rescue.  He then suffered the ultimate loss in 2009, when his four year child died at St Joseph’s Hospital in Phoenix following an accident.

In the past few years, Tyson has shown signs of character.  He has taken ownership of his prior behaviors and addresses them candidly in his one man show titled Mike Tyson: Undisputed Truth, which has toured the country with rave reviews.   I hope that he will one day perform here, so I can hear his story.

During his playing career, the man recognized simply as “OJ” or ‘Juice” embodied everything one could want in a superstar athlete and role model.  He was graceful yet powerful, collegial yet competitive, successful yet approachable.

OJ broke onto the scene playing for USC in 1967 and 1968.  Following the ’68 season, he won the Maxwell Award (given to best college player as voted by sportswriters, sportscasters and coaches) the Walter Camp Award (given to the player of the year as determined by Division 1-A coaches) and the Heisman, which he won by the largest margin ever in Heisman history.

The Buffalo Bills drafted Simpson first overall in 1969.  OJ was about as far away from the glitz and glamor of Southern Cal as can be imagined and was playing for a pathetic franchise.  He had only marginal success in his first three seasons but in 1972, he finally broke the 1,000 yard rushing barrier.  In 1973, he nearly doubled that, rushing for 2,003 yards, the first ever to do so.  Even though others have since rushed for more than 2,000 yards, it is important to note that Simpson did this is just 14 regular season games rather than the current regular season total of 16 games.  From 1972 to 1976, he averaged more than 1,500 yards per 14 game season, winning four NFL rushing titles.  Simpson’s pro career was then hampered by injury in 1977, followed by two fairly unremarkable seasons for his hometown San Francisco 49ers.  He retired following the 1979 season.

Immediately following his Hall of Fame (inducted in 1985) career, he transcended sports to become an iconic celebrity, possessing Hollywood-like good looks and charisma.  He had a career in both acting (for which he was not at all gifted) and broadcasting (including a stint on Monday Night Football), and for years was the spokesperson for Hertz Rental Cars.

Then the unthinkable happened on June 12, 1994.  Simpson’s ex-wife, Nicole, and Ronald Goldman were both murdered.  Simpson was charged and tried for the double murder.  In the face of mountains of evidence against Simpson, a jury acquitted him following a circus of a trial in 1995.  Despite that jury’s verdict, the vast majority of people “know” that Simpson was guilty as sin.  Perhaps a sign of fate catching up with him, Simpson was arrested in 2007 in Las Vegas following an incident involving Simpson’s memorabilia.  He was convicted in 2008 for charges including armed robbery and kidnapping and sentenced to 33 years in prison, with a minimum of nine years before eligible for parole.    There are pending appeals that may impact how much longer he will remain in prison as a guest at Lovelock Correctional Center in Nevada.

In case you missed the first four installments of this series, the Dishonorable Mention list is reserved for those who committed the crimes of never living up to their athletic potential and then being convicted of actual criminal offenses.  Here is the Top 5, including the final inductee:

In astronomy, a supernova is the stellar explosion that occurs just before a star’s core collapses.  For me, Rae Carruth was the NFL version of a supernova.

Carruth played wide receiver for four seasons at the University of Colorado and, in 1996, was named First Team All-American.  The Carolina Panthers drafted him in the first round of the 1997 NFL Draft with the 27th overall pick.  They signed him to a four-year contract and in his first year, he was named to the All-Rookie Team after having caught 44 passes for over 500 yards and 4 touchdowns.

Then the collapse began.  He broke his foot at the start of the 1998 season, missing the remainder of the year.  He played in six games of the 1999 season, making just 14 receptions for 200 yards.  It all came to an end in mid-November of 1999, and Carruth never again set foot on a gridiron.

As the story is told, Carruth had a “baby-momma to-be” named Cherica Adams.  She was eight months pregnant in November of that year.  According to reports, Cherica was following Carruth to his home and was driving her car behind the car driven by him.  It was alleged that he suddenly came to a stop, causing Cherica to do the same.  At that moment, another car drove up alongside Cherica’s car and the driver shot her five times. She somehow survived for a number of weeks, but died in mid-December.

Many versions of the story of her murder were told but the one that resonated was that Carruth was behind the killing because he had wanted Cherica to abort the pregnancy and she refused.   Apparently, the idea of having to pay 18 years of child support was not acceptable to him.  Among the strongest of the evidence against Carruth came from Cherica who, despite her would-be fatal injuries, was capable of making a 911 call while fighting for her life on that road following the shooting.  During that call, she implicated Carruth in the episode.

Eventually, Carruth was found guilty of conspiracy to commit murder and is currently serving a sentence of 18-24 years in prison in Lillington, North Carolina, which is about 150 miles east of Charlotte.  His earliest release date is in five years.  His son, Chancellor, who was somehow saved by doctors, had suffered irreparable brain damage due to the absence of oxygen as a result of Cherica’s injuries.  He has been diagnosed with Cerebral Palsy.  He is being raised in the loving and nurturing care of Cherica’s mother, Saundra Adams, in Charlotte, North Carolina, just miles from Bank of America Stadium, home of Carruth’s former team, the Carolina Panthers.

This series has not been a tribute.  Rather, it is a sad commentary.  For just an elite few, athletic prowess and dedication allows them to rise to the highest peaks, earning income figures and public idolatry the likes of which the rest of us can only dream.  And then they stumble, most often because of the obstacles they place in front of themselves.  We watch them fall to the depths of the valley, a place that the rest of us can only pray we never experience.

So let’s not put those among us who can run faster, jump higher of hit harder on too high a pedestal.  We should continue to be in awe of what they can do but we should never confuse that with being in awe of who they are, unless they earn that.

It’s Part of the Game, But Is It Legal?