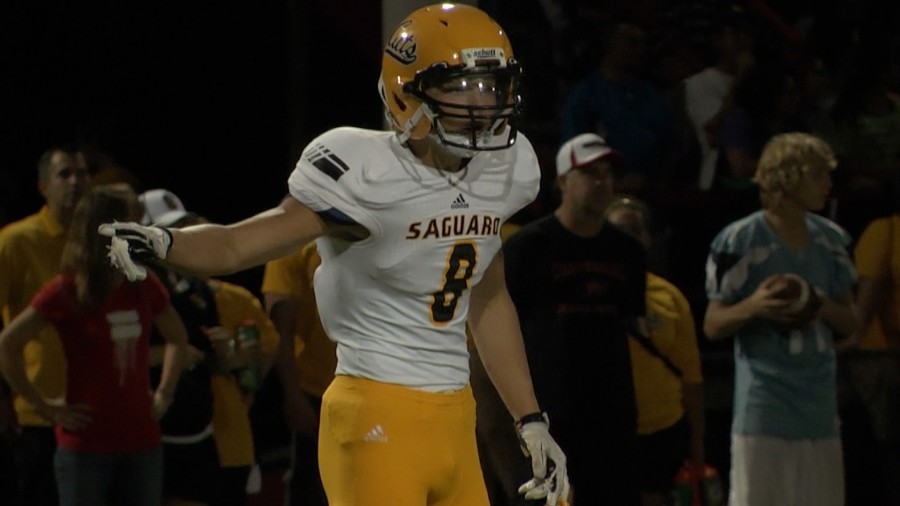 Saguaro head football coach Jason Mohns was going about his daily routine last spring semester when he was approached by some of his players who asked if he had seen the new kid at school from Washington.

Mohns hadn’t, so he went over to the gymnasium to see J.T. Nettleton for the first time who was playing basketball during his baseball class. To say the least, Mohns was impressed with what he saw.

“I went and watched him and he was dunking the ball,” Mohns said. “He was long and athletic so I went and talked to him and he said he was planning on playing football.”

Before Nettleton could step foot on the football field for the first time, he suited up for Saguaro’s baseball team. Coach Mohns did get a small scouting report on Nettleton from the baseball head coach, Ryan Dyer, who told him that J.T. was one of the most athletic kids he had ever coached.

Saguaro has long been known as a football powerhouse so you can imagine how some of the Sabercats best football athletes felt when they heard the new kid is the best athlete some coaches have seen at this level.

“We didn’t really see much of him because he plays baseball too and all we kept hearing is J.T. is so fast, he is the fastest kid out there,” Saguaro’s Christian Kirk told the Recruiting Roundup as a guest host last month. “So we all thought ‘ok maybe he is fast. Blah, blah, blah.’ But then he came out for spring ball, man he can go.”

“Some of the guys, Luke (Rubenzer) and some of the other guys were out on their own running route and he went with them,” Mohns added. “Some of them came back and said this kid is legit.”

“It was too satisfying,” said Nettleton when asked how it felt to live up to his hype coming in. “A lot of people were talking but everyone had faith in me. Nobody doubted me. I was just glad I stepped up to what everyone was expecting.”

It didn’t take long for Nettleton to cement himself as a key piece for the Sabercats in 2013. He started running with the first-team on defense at strong safety just days into practicing with the team and soon after did the same on offense at wide receiver. That momentum has since carried over into the beginning of the 2013 season as he led Saguaro in receiving with three catches for 113 yards and a touchdown as well as nine tackles including a forced fumble on defense in week one.

“It was probably the best football experience I have ever had in my life,” Nettleton mentioned after his first game last week. “I wouldn’t pick a single other team to be with.”

Out of state transfer turning heads at Saguaro