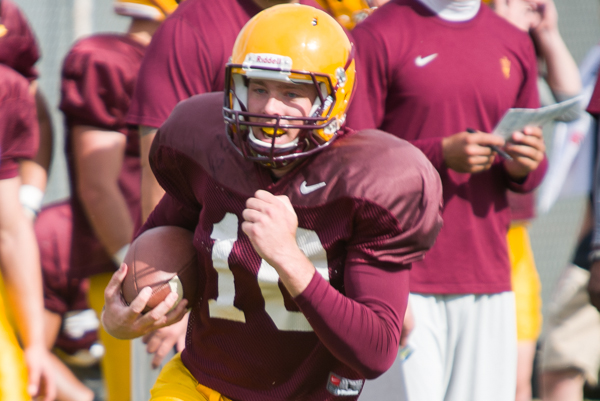 On a rainy day in Tempe, the returning players had their first practice in the morning and the new players practiced separately in the evening. For a Sun Devil team that has big expectations this season, taking to the field for the first time was an exciting feeling.

“It was a good first day,” said head coach Todd Graham. “What we really want to focus on today was ‘PT-42’ having great passion, being competitive, being mentally and physically tough. Coach-ability which is getting better on every single rep. I think we’ve done that. And then of course be disciplined and fundamentally sound. I was pleased with the first day.”

“We had a lot of energy and I thought it went well,” added ASU quarterback Taylor Kelly. “Guys were looking great on both sides of the ball. The summer training is really showing and paying off for us, so we are excited to continue practicing.”

One motto that the Sun Devils are adapting that was not present last season is the premise of players coaching players. In year one, it was all about the new coaching staff getting the players acclimated with the new system and what was expected of them. Now that there is more familiarity, the veteran players are expected to lead and teach just as much as the coaches do.

“Coach players. That is out big thing this year,” explained Kelly. “We have Will Sutton coaching a rookie or even Carl Bradford. I am coaching receivers and receivers are coaching me. It’s a different vibe this year. We have high expectations for ourselves.’

On day one, most of the returning players practiced in the morning and for the first two days of fall camp, the new comers are practicing separately in the evening. The reason for that is so the new guys can adapt to the pace and complexities of a practice at this level at a different pace off the bat and don’t have to worry about falling behind.

There are high expectations for some of the incoming freshman or transfers coming into the program in 2013 to provide extra talent and depth.

“We have a lot of newcomers that we think are going to be impactful especially with our depth,” mentioned Graham. “A lot of guys who are newcomers will have a good chance at being on our two-deep (depth chart)…I feel really good about this bunch.”

ASU continues practice in Tempe for the next week before heading up to Camp Tontozona on August 13th.