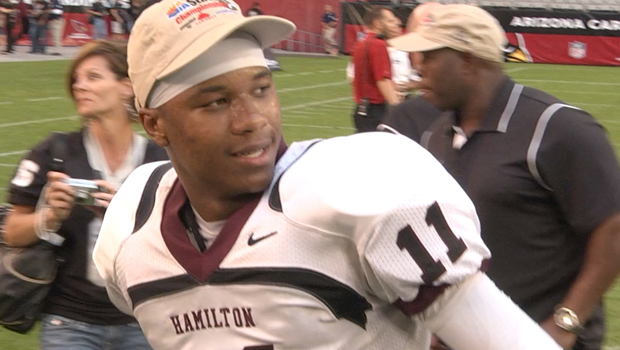 Hamilton Huskies: The defending state champions in division I look as strong as ever which is scary to think about. It will all start with their defense. With at least eight next level players on that side of the ball including  defensive ends Qualen Cunningham and Caleb Peart, defensive tackle Garrett Rand, safeties Juwan Jones and Josiah Pola-Gates, defensive backs Jalen Jenkins and A.J. Greathouse and line backer Santana Sterling. With quarterback Sammy Sasso taking over on offense, the Huskies will have plenty of talent on that side of the ball too. As good as they are on paper, they are going to have to show it on the field as well as there are very few “easy” game on the schedule consisting of two out of state games as well as matchups against Brophy, Pinnacle, Mountain Pointe, Chandler and Basha in the first month and a half of the season.

Highland Hawks: Highland is an intriguing team because they are coming off of a 2012 season where they could have been in position to win as many as nine games. The won six including one over Desert Mountain, but were in position to beat Basha until late in the game, got off to a slow start against Mountain View but then outplayed them for the final two and a half quarters and played Red Mountain very tight on the final game of the season. In 2013, their strength will be on defensive with returning starters at line backer with Tre’ Tyler, and at defensive end with Grant Gale and Grant Thompson who combined had 18.5 sacks in 2012. On offense they brought in a transfer from Gilbert in Ducky Cook who opposite Colin Gardner at tight end, make for two very good receiving threats. It wont be easy but head coach Pete Wahlheim will have this team be a tough out every week.