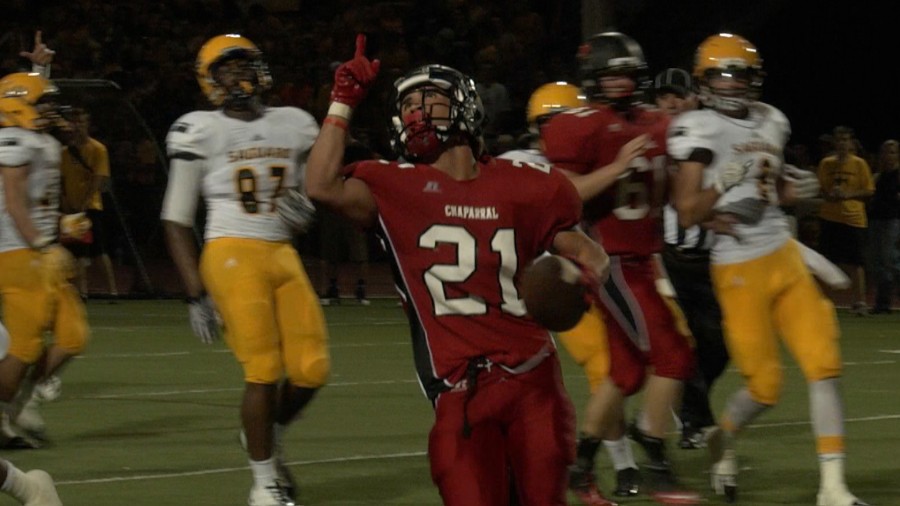 There is countless talent on the Chaparral Firebirds roster in 2013.

They have big names on both sides of the ball but particularly on offense with wide receivers Tyler Whiley and Israel Simpson, tight end Trevor Wood, offensive tackle Keenan Walker and quarterback Sean Paul Brophy.

One player however that may have been floating under the radar going into the season is running back transfer from Sunrise Mountain, Elijah Castro. After Chaparral’s 52-27 win over rival Saguaro, he is no longer a secret as he rushed for 174 yards and 4 touchdowns in his Firebird debut.

“No Sir!,” Castro told Pros2Preps.com when asked if his Firebird debut could have gone any better. “But I couldn’t have done any of it without my offensive line…Saguaro’s linebackers are tough guys but I have to give it to our offensive line. They were the MVPs tonight.”

Those who follow high school football know of Castro for what he was able to accomplish last season with Sunrise Mountain. He rushed for over 1,000 yards and 13 touchdowns on the year. Coming to Chaparral, he has stepped right into the Firebirds offense and is taking on a big role, especially after his fellow running back, Emerson Carrethers went down with a season ending knee injury.

“No one really knows about him,” said Tyler Whiley. “He can play running back, receiver, he’s a playmaker where he is like so many guys we have it’s like pick your poison. They picked all of us and he was open to do everything else.”

“Playing with Tyler Whiley, Trevor Wood, all those guys. Keenan Walker and Marshall Forrest, they push me,” Castro mentioned. “They push me every day at practice. Emerson Carrethers before he got hurt, he is like a brother to me. He pushed me every day, got me better every day.”

One area where Castro will be important for the Firebirds, is leadership. With the game against Saguaro pretty much out of reach in the fourth quarter, a time when you might find most of the starters take a knee and become spectators for the rest of the game, that’s not what you’ll see from Castro. He is up cheering on his teammates, running at his coach to check in what he can do next whether on offense or special teams.

It’s an example that is so valuable for head coach Dave Huffine.

“He comes out and plays as hard as he can each and every play,” coach Huffine said. “There is no let up. He had as much juice at the end of the game as he did in the beginning. That’s the one thing you’re going to get from him…The better he gets, the better our team is going to be.”

“There are no days off here, it’s like a game every day,” Castro explained. “It’s great being at Chaparral. I am very happy and blessed to be here.”