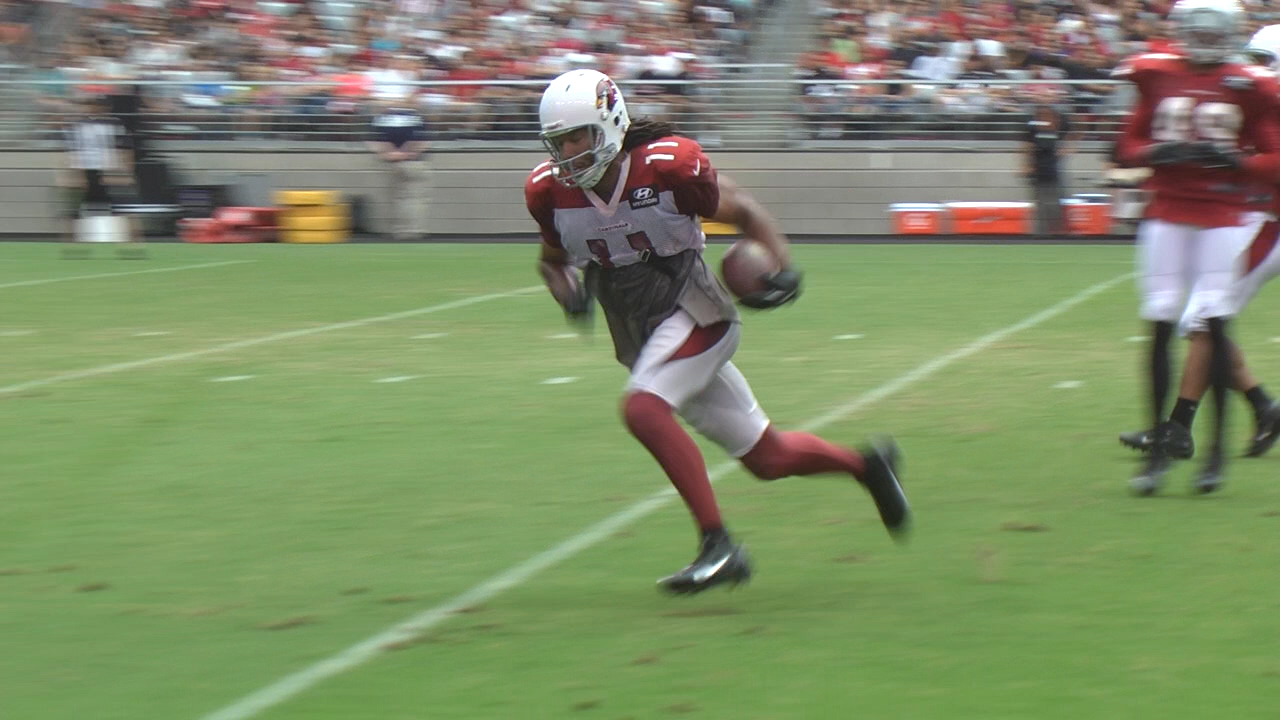 Next Friday night, the Arizona Cardinals will be in Green Bay, Wisc., to take on Aaron Rodgers and the Green Bay Packers in their first preseason game.

Lambeau Field is a very tough place for any opposing team to walk into and walk out of victorious, so it will behoove the Cardinals to get as much out of their practices as they can before they head out next Thursday.

One of the most anticipated events during training camp is when the team puts on their Red and White Scrimmage, which they did on Saturday at University of Phoenix Stadium.

The scrimmage brought out nearly 15,000 fans, and the players fed off their energy for the entire 2 1/2 hour practice.

“It was nice to have the fans come here and support us, it [was] pretty wild out there, a lot of fans came out,” defensive end Calais Campbell said. “It felt like a real game almost.”

There wasn’t any hitting involved in the practice, but that didn’t cut down on the intensity level at all according to Campbell.

“It was very physical, I think that we did a bunch of good things, we could’ve done things a lot better, that’s just the way it is,” Campbell said.

The high level at which this scrimmage was played at should serve the Cardinals well next Friday night against the Packers, despite no one being able to hit each other.

The anticipation that Cardinal players have toward hitting someone that’s not one of their own is at a fever pitch.

“It’s always good to put those pads on,” inside linebacker Daryl Washington said. “I can’t wait to get out there. Hopefully I’ll play more than two series, I’m looking to play two or three quarters maybe.”

Washington had the best play of the day by far: a one-handed interception that he returned for a touchdown.

“I wasn’t trying to catch it one-handed, it kind of just got attached to my paw, so it was an easy play,” Washington said.

Washington can tell an immediate difference between the tempo of a Bruce Arians-led practice and one ran by former head coach Ken Whisenhunt, who’s now the offensive coordinator with the San Diego Chargers.

“The tempo is very good,” Washington said. “Everyone’s buying into what Coach B.A. [Bruce Arians] is doing, so we’re having a lot of fun.”

The unfortunate side of training camp are the injuries that occur to the players, in particular guard Daryn Colledge, who didn’t take part in Saturday’s scrimmage due to nerve irritation in his right leg.

Fanaika feels for Colledge, but at the same time, he realizes this is a golden opportunity for him to show Arians and his coaches that he’s capable of being one of the starting guards on the Cardinals’ offensive line.

“It’s unfortunate that Daryn’s down, but you know the next guy’s gotta pick up the offense, so the best thing I can do is be ready when they call my name,” Fanaika said. “You don’t want a big drop-off, you want to pick it up from where the other person left it off.”

Arians is very impressed by what he’s seen so far from Fanaika. After all, this is a man who’s been out of the NFL for over a year, but Fanaika’s been constantly training and waiting for his chance to get back in the league, and it looks like Arizona could be his long term destination if he keeps it up.

“I keep telling them, ‘When you get an opportunity, you’re either gonna get exposed or you’re gonna get exposure,’ and he’s done a great job with his exposure,” Arians said. “I can’t say enough about what he’s done with his chance.”

Fanaika’s stellar play so far in camp is making the right guard position a very much coveted spot, as it looks like he and Colledge will be dueling it out to be the starter there, once he returns from his injury.

“Yea, I think anytime you get the exposure he’s gotten and do that well with it, the guy behind you that’s hurt, he needs to get back out there,” Arians said.

Mathieu and Minter both ready to get started with Cardinals