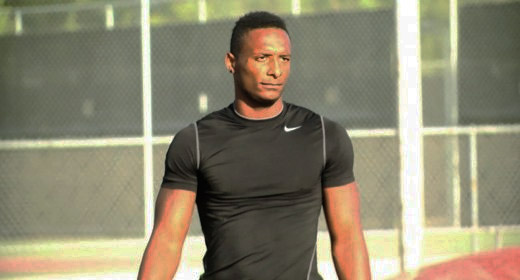 Those have been the slogans on the new billboards that the Arizona State football program have put up in the offseason in an effort to keep the in-state players from the great 2014 class in-state and play for their hometown school.

On Tuesday, Chaparral wide receiver Tyler Whiley became the first player from that Arizona 2014 class make a verbal commitment to the Sun Devils. And he hope he is the first domino to fall in that direction.

“Yeah I sure hope so because DJ Foster was actually the first one,” Whiley explained. “I am trying to follow in his footsteps a little bit and then see what guys come in the following years.”

“They want me to be a leader of the recruiting class for Arizona State,” Whiley added. “I trusted what they had to offer and everything like that.”

The pipeline from Chaparral to ASU has been a good one in recent history. Players like wide receiver Kyle Williams and defensive back Deveron Carr went from being Firebirds to Sun Devils to both having great careers at ASU and have opportunities at the NFL level.

“I look up to them a lot,” Whiley mentioned. “Coach Huffine had all of those guys under him and I’ll try to follow in those footsteps.”

One of Whiley’s current Chaparral teammates and best friends is tight end Trevor Wood. Many in the recruiting world thought that the two might commit to play together at the next level. However, that will not be the case as Wood recently named his top three of Arizona, UCLA and Oregon plus recently added an offer from Alabama, leaving ASU off his radar.

Whiley chose ASU over his other top for schools which included Arizona, UCLA, Oklahoma State and Tennessee. One thing he is most looking forward to is the opportunity to play in the Pac-12.

The ASU commit also weighed in on the Sun Devils uniform combinations. His favorite is the black helmet with the white jerseys and black pants. The ones that ASU just so happen to wear in their win in Tucson last season.

“That’s one of the reasons,” Whiley said to why that jersey combination is his favorite.

“But I mean I’ll still wear it,” he clarified.

Now with the decision behind him, Whiley focuses in on his senior season at Chaparral. A season in which his Firebirds are coming off their first state championship-less season in four years. Something he and his teammates plan to change.

“We’re just trying to bring Chaparral back,” he stated. “Just bringing that tradition back to the school and the program and just win a state championship.”