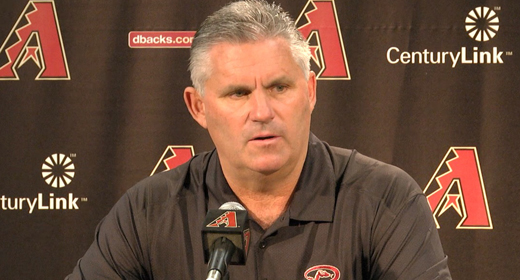 The clock is ticking.

Despite weathering a forgettable 2-8 east coast road trip and sweeping the weekend series against National League West foe Colorado there are whispers inside baseball circles the Diamondbacks and proactive general manager Kevin Towers will be looking to add a piece or two for the stretch run before the July 31 trade deadline.

“Teams are going to start to make moves,” ESPN baseball insider Pedro Gomez said in a recent phone interview with Pros2Preps.com. “We’re going to see if the Diamondbacks are going to…it’s probably going to be on the sooner end. I’d be surprised if Kevin Towers doesn’t react.”

Despite their lead in the NL West (4.5 games over the Dodgers as the two open a three-game set Monday night) there are issues to address, specifically in the starting rotation and back end of the bullpen where both have been plagued by injuries and inconsistencies.

‘That’s been the most surprising aspect of this season for the Diamondbacks,” Gomez explained. “The fact that the bullpen has been so erratic. When you looked at [Brad] Ziegler, [Heath] Bell, [David] Fernandez, [J.J.] Putz you saw a bullpen that was the envy of a lot of people in baseball. For [them] not to deliver the way the Diamondbacks thought [they] would has been probably the biggest surprise of the season. This is a bullpen they really liked.”

He believes adding depth to the starting rotation is also on Towers’ wish list along with trading for a reliever, especially with Daniel Hudson again out of the picture after re-injuring his ACL last month. Outside of recently selected all-star Pat Corbin who improved to 10-1 Sunday, another starter has yet to string together a number of quality starts but there have been flashes from Ian Kennedy (3-4) and Wade Miley (5-7), who picked up a victory Saturday night at Chase Field against the Rockies.

Gomez mentioned Arizona has benefitted from playing in the watered down NL West (every team below them is under .500) and despite the recent road struggles still have one of the better records away from home (23-25).