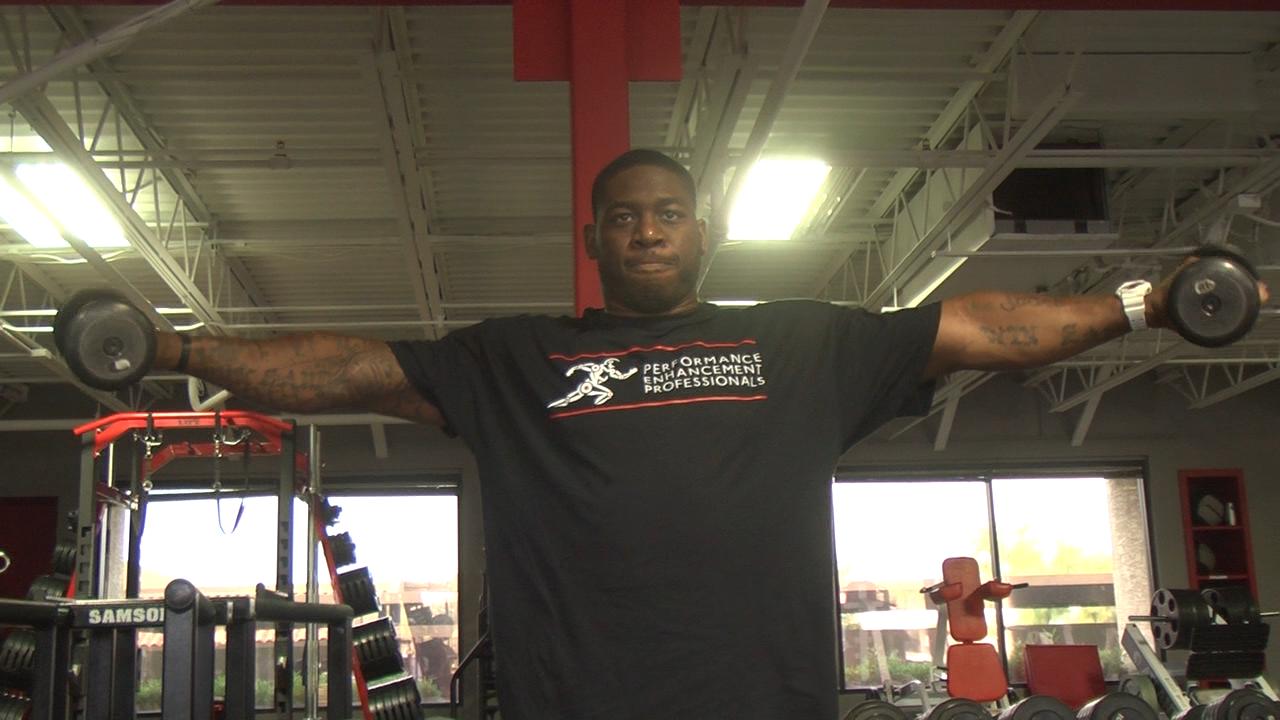 Cardinals outside linebacker O’Brien Schofield doesn’t need any outside motivation to prepare for his job and to do his job. He’s got enough internal motivation to make those things happen.

Schofield allowed me to come and shoot one of his training/workout sessions on Friday morning at Performance Enhancement Professionals, or PEP as it’s commonly known, out in Scottsdale, Ariz., and after leaving the building, I got a much clearer sense on what a football player has to do in order to stay on top of his craft.

Schofield and his personal trainer did all upper-body work on Friday, getting him limbered up and maintaining the upper body strength he’ll need this coming season, his fourth in the league.

Schofield suffered a left ankle injury last season in Week Nine against the Packers in Green Bay, Wisc., which put him out for the rest of the season. At that point of the season, Schofield had 26 tackles, eight assists and four sacks, so he was well on his way toward having a very solid season.

Then the unimaginable happened.

Time, they say, heals all wounds, which it’s seeming to do in Schofield’s case. He told me he’s at “90-percent” right now and moving toward 110 every single day. He’s at PEP six days a week, and has been ever since the NFL Combine, getting himself in the best shape he can.

“Physically I feel great, I’ve been working really hard to get healthy and get ready for training camp,” Schofield said. “I actually put on 15 pounds, so I’m 15 pounds heavier than I was last year.”

“I’ve been training hard. This is my year and I plan on going out with a bang,” Schofield said.

Cardinals training camp is just a few weeks away, and for the first time since the team relocated to Arizona from St. Louis, Mo., 25 years ago, the team will hold camp down in the Valley, with their practices taking place at a very familiar place for them: University of Phoenix Stadium.

Schofield said he dreaded the drive up to Flagstaff, Ariz., and NAU, simply because it’s a dangerous drive with speeding drivers and all the winding roads on the way there.

He’s all for having training camp right in Glendale, Ariz., so he can be closer to his family and near his own bed.

“I think that’s a great idea,” Schofield said. “One, familiarize [the] guys with the stadium, because usually we only get to go there eight times a year.”

The Cardinals – with the exception of any home playoff games – will play 10 games at home this year, including preseason games. For them to get any added playing and practice time inside their stadium, Schofield feels, gives them a distinct advantage over the rest of their competition.

“Absolutely,” Schofield said. “Playing indoors is a lot different than playing outside. From a conditioning standpoint, it’s also going to be different. I think they’re going to actually bring in another field and we’ll be playing on two fields, so that aspect of it from a grass and turf field will be pretty good for us.”

Schofield can sense a shift in how the Cardinals front office is handling their duties when it comes to taking care of their players, like with moving training camp out of Flagstaff, Ariz., and to the Valley.

“They’re doing a very good job of turning things around and looking out for the betterment of the players and taking better care of the players, and in return, the players, I feel like they’re going to do a great job, give effort and win games.”

This is the final year of Schofield’s contract with the Cardinals. With that coming to an end, and no guarantees of what’s to come in the future, Schofield feels like it’s time to go in a different direction with his approach to the game, as he wants everyone to know he’s taking no shorts this year on defense.

“My mindset is I’m going to set my own role, I’m going to play VERY hard in practice, and in preseason and in games,” Schofield said. “Wherever it may fall, that’s where it’s gonna be.”

“I’m not going to say so much of accepting a role, because the way things are, we’re competing for spots,” Schofield said. “The way I feel is, the more I’m on the field, the better I give my team a chance to win. I think that any other player on the team would feel the same way and that’s the mindset that I’m taking into this season.”