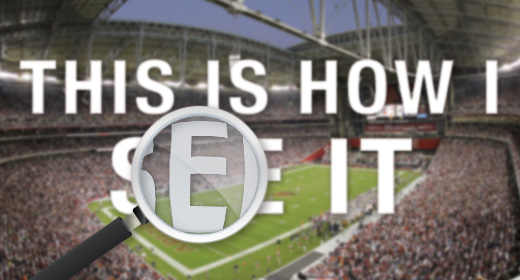 I couldn’t help but be jealous.

Staring across my middle school cafeteria holding a tray filled with processed mystery meat, waxed vegetables and a sippy cup-sized carton of 2% milk watching my best fiend walk towards me with a smirk on his pimply face and a never-before-seen swagger to his step.

My eyes were fixated on his t-shirt.

It was so new I’m pretty sure it still had the shiny little Starter brand sticker on it.

A majestic red with “Phoenix Cardinals” arched over the bird helmet.

January 16, 1988 marked a new beginning for the Bidwill family and the state of Arizona who welcomed the Cards to the Valley just two years after the USFL Arizona Outlaws folded.

When new head coach Bruce Arians and his team gather for training camp in a couple weeks it will mark the silver anniversary of Cards football since the nest was first built at Sun Devil Stadium.

They say time flies when you’re having fun but the past 25 years have been no NFL picnic.

January 16, 1988 marked a new beginning for the Bidwill family and the state of Arizona who welcomed the Cards to the Valley just two years after the USFL Arizona Outlaws folded.

The franchise has posted double-digit wins just once (2009 when they finished 10-6) in Arizona.

Not to mention endless jokes and snickers around the league over the past quarter-century ranging from the sizzling empty metal bleachers at Sun Devil Stadium in the early years, the frugality of the Bidwill’s, player personnel gaffs and numerous on-field embarrassments-most recently last season’s 58-0 drubbing in Seattle where our Bird Gang had almost as many turnovers (eight) as first downs (10).

The average lifespan for a Cardinal head coach since the midwest move has been just over three years.

You could make the argument the Valley has been worse off since the moving vans arrived back in ’88 but that’s a discussion for another day.

As with every new season, as training camp inches closer, we will be spoon fed hope and promised change under the “new direction” of Arians and his overhauled staff but the savvy one’s have been conditioned. The hype is merely a desert mirage.

Many are simply happy we have an NFL franchise as evidenced by the Red Birds’ long-running sellout streak at University of Phoenix Stadium and the estimated 12,000 people who attended the dumbed down, half speed practice called Fan Fest last month in Glendale.

I don’t doubt this year’s team will have more talent, without question more stability at quarterback if they can Carson Palmer upright but the problem is everyone in the NFC West has gotten substantially better, including the team which now resides in St. Louis.

With the exception of one magical season and defeating the hated Cowboys in the late 90’s what do we have to show for the last 25 years?

About the same as I had on that cafeteria tray back in 1988.

Neither the meal, nor the Cardinals, exactly left me wanting more.

Arians in charge in Arizona

Is Ryan Williams the odd man out?

Two Points Or Not Two Points, That Is This Week’s Question