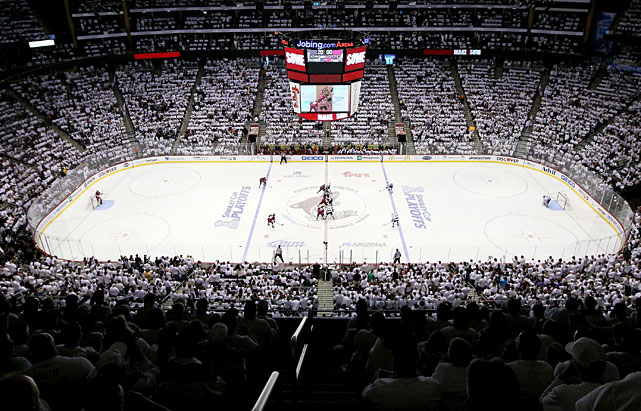 After a long and contentious four years, and wondering if they’ll be in Arizona on a permanent or semi-permanent basis, the Phoenix Coyotes finally learned their fate:

The Glendale City Council on Tuesday – with a few changes to the deal – voted 4-3 in favor of a lease agreement with Renaissance Sports & Entertainment, better known as IceArizona.

As part of the agreement, the team will no longer be known as the Phoenix Coyotes, but as the Arizona Coyotes.

“Everybody who’s followed this saga has said decide something or just shoot us,” Coyotes general manager Don Maloney said. “Fortunately, we got the result we needed to stay in a great place and a great hockey town.”

“We went into this hopeful and we’re very, very happy, very grateful not only to the councilmembers here, but all the residents and taxpayers here,” IceArizona partner Anthony LeBlanc said. “We are looking forward to a solid partnership and making this a (success) for all those concerned.”

IceArizona must finalize the lease agreement and the purchase of the team by August 5.

IceArizona has a five-year out clause, which allows them to back out if the team loses $50 million or more over that time period.

The city tried to push on a similar out clause of its own, but it ended up being a deal-breaker, so it ultimately fell on deaf ears and got voted down.

“I am still uncomfortable that we’re taking on all the risk,” Mayor Jerry Weiers said shortly before the votes were casted.

There was a lot at stake with this vote, especially when it came to the entire Westgate Entertainment District.

Jobing.com Arena –built specifically for the Coyotes – is one of the main anchors in the sprawling area, which has seen a new Tangers Outlet mall open up, along with restaurants, hotels, various shops and other buildings.

If the council said no to the agreement, then the Coyotes would’ve had no other choice but to move to another city and setup shop there, which would’ve changed a lot of people’s lives, especially those who are employed by the team and those who work in the Westgate District and look to the Coyotes to provide them business during the season. Seattle, Quebec, Houston and Kansas City were just a few of the cities that were in the mix for the team.

The Coyotes and their fans finally have this situation behind them. Now they can look forward to five more guaranteed years of hockey in the state of Arizona.

Lockout ending, time for Coyotes ownership to step up