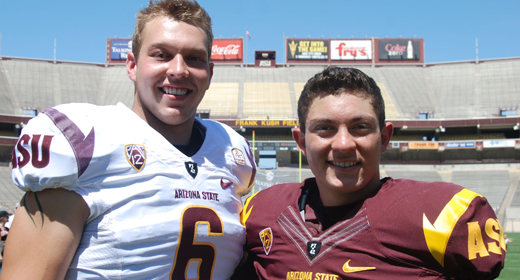 Reunited and it feels so good.

Chans Cox and Daniel Groebner are together again.

The former Blue Ridge High Yellow Jacket football stars are sharing an apartment in Tempe and will begin their playing careers at Arizona State this fall when the Sun Devils open the season September 5 hosting Sacramento State.

Their paths led them in somewhat different directions before each landed in the Valley.

Cox, one of the most decorated prep linebackers in the state last year, picked ASU over Oklahoma, USC, Nebraska, Notre Dame and others. He committed relatively early after forging a relationship with head coach Todd Graham.

“Chans is a guy [who] I was very close to in the recruiting process,” Graham told Brad Cesmat in a recent interview on ‘Big Guy on Sports.’ “He came to ASU because of what our program is about.”

It was an excellent pickup for Graham who promised to improve in-state recruiting after taking over for Dennis Erickson. Cox also fits the mold of the type of player and person he wants in maroon and gold.

“He’s probably one of the finest young men from a character standpoint that I’ve had the privilege of recruiting,” Graham explained to Cesmat. “Chans is a guy who’s going to [make an impact] this year. 6’4, 240 pounds and can flat-out run. He can do some great things.”

Graham believes the ultra fast and intelligent Cox will contribute as a true freshman barring any injuries.

Groebner, one grade ahead of Cox, played baseball at Cochise College in Douglas last fall before deciding to walk on at ASU and pursue a college career on the gridiron. After playing a myriad of positions at Blue Ridge including running back, punt/kick returner, punter and kicker he is projected to play slot receiver with the Devils.

“[Danny’s] the kind of guy who brings that great work ethic and character that that Blue Ridge program produces every year,” Graham said. “Danny’s a guy who’s had a great spring.”