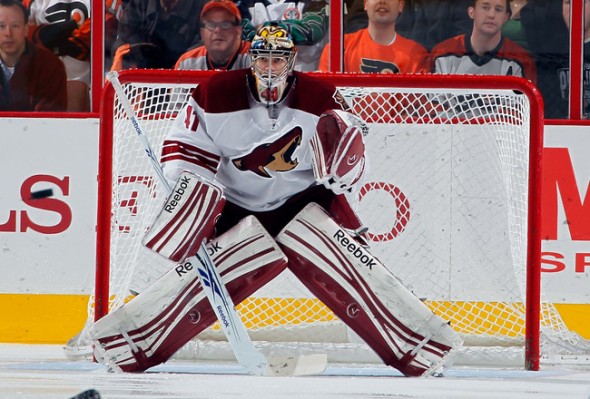 The Phoenix Coyotes got their goalie back.

The team officially announced on Monday that they signed Mike Smith to a six-year contract.

Per AZCentral Sports’ Sarah McLellan, the deal is worth approximately $34 million.

According to McLellan, Smith’s deal includes a no-movement clause, preventing any trades or waivers in the first three years, and a no-trade clause in the final three years of the contract.

“We are pleased to sign Mike to a multi-year contract,” said Coyotes’ general manager Don Maloney. “Mike has emerged as a top NHL goaltender with his size, athletic ability and strong work ethic.”

“He is capable of leading us to a Stanley Cup championship, the goal of our franchise,” Maloney said. “This is an important signing for our Club.”

“I’m thrilled to re-sign with the Coyotes,” Smith said. “We have a great young team and an excellent coaching staff and management team. I’ve really enjoyed playing in the Valley the past two seasons and this is where I wanted to stay.”

Retaining Smith was of utmost concern for the Coyotes, but the uncertainty of where the team would be this coming season, along with the uncertainty of if Maloney, goalie coach Sean Burke and head coach Dave Tippett would be back put a crinkle in any negotiations.

But the dominoes seemed to fall in place, once Maloney, Burke, assistant general manager Brad Treliving and Tippett all decided to continue on with the team.

“It’s a huge plus for our organization,” Tippett told McLellan. “We look at him as one of the key players on our team, a core player. We just think he can solidify that position for a long time.”

Coyotes GM Maloney: ‘We will have a hockey team’

Coyotes with more to prove than ever as training camp begins