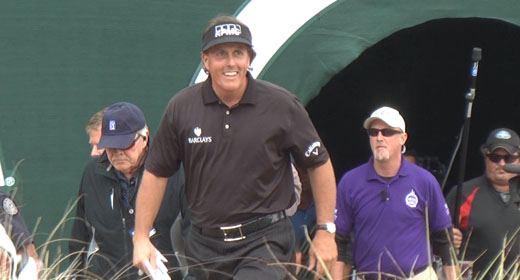 We love big events in Arizona. We have a Super Bowl coming in 2015. We hosted a 7th game of the World Series, title games in College Football, and a NBA title series in 1993.

Phil Mickelsons win today at the Open Championships will go down as one of the great rounds in golf. His victory is just another reminder to the sports fans of our state that Phil will be back in Scottsdale as the defending champ in the Waste Management Open next January. His heartbreak at the U.S. Open and the win at Muirfield has the Thunderbirds and fans of sport in Arizona counting down the days till they can see Mickelson in person.

As many of you watched Phil win today, the man in the gray suit that greeted Mickelson with a big hug was his agent Steve Loy, who’s based in Scottsdale.

Phils brother, Tim has done a very good job in a short period of time as the head golf coach at ASU. Quite a few Arizona ties to the Mickelson name.