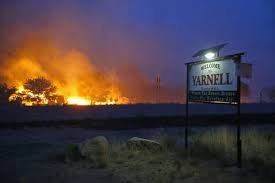 We’ve all been affected by what happened with the wildfires in Northern Arizona and the 19 firefighters who, unfortunately, gave their lives in the fight against them.

Defensive end David Carter, team mascot Big Red, Nicole Bidwill (daughter of Cardinals’ owner Bill Bidwill) and her rescue dog Barney made the trip to Yavapai College in Prescott, Ariz., on Tuesday afternoon and met with 81 residents and service personnel who were in the gym on campus.

The gym is serving as one of the shelters, which is giving residents who were evacuated from the area a place to stay.

For Carter, being there and showing support was just a way of allowing the people there to take their minds off everything that’s transpired recently.

“They were kind of down when I walked in there,” Carter told AZCardinals.com’s Josh Weinfuss. “We had the big dog and all the kids got excited. It was great to se smiles on their faces, and not worrying about their house.”

“Our hearts go out to all of those affected by the devastating and tragic events this week, especially the families of the 19 brave members of the Granite Mountain Hotshots who lost their lives serving our community,” said Bidwill. “Our team is proud to assist the ongoing efforts and encourage our fans, the community and Arizona businesses to support these relief initiatives.”

The team is also planning on having more fundraising events, which will go hand-in-hand with the start of training camp and the start of the regular season.

Even though Carter and the Cardinals went up there with a specific purpose: to spend some time with the people and bless them, he seemed to get as much of a blessing than they did by being there.

“It was a great experience, it warmed me up on the inside,” Carter told Weinfuss. “We had the big dog and all the kids got excited. It was great to see smiles on their faces and not worrying about their house.”

The outpouring of support with the local pro franchises didn’t stop with the Cardinals. The Suns and Mercury also held a donation drive on Tuesday. Donations were taken at the Casino Arizona Pavilion inside U.S. Airways Center prior to the Mercury’s game with the New York Liberty.

Like the Cardinals, all proceeds gathered went to the 100 Club of Arizona.

As a bit of incentive, everyone who made a donation received their choice of a Suns or Mercury t-shirt, plus they were entered into a drawing for autographed merchandise.

The Diamondbacks have been honoring the memory of the fallen firefighters by wearing a special No. 19 patch on their jerseys during their series with the New York Mets. They’ll wear the patches for the remainder of the season.

The team is doing a number of things during this weekend’s series versus the Rockies at Chase Field. They’ll be wearing black jerseys with the No. 19 patch and will observe a moment of silence for the fallen firefighters.

The Diamondbacks are also encouraging fans who come out to make at least a $19 donation for a chance to win a Yarnell No. 19 jersey, which will be signed by the team.

In addition, the Arizona Diamondbacks Foundation will match any online donations up to $100,000 and will donate all proceeds from this weekend’s 50-50 raffle to the American Red Cross, the 100 Club of Arizona and other charities that are helping everyone affected by the wildfires.