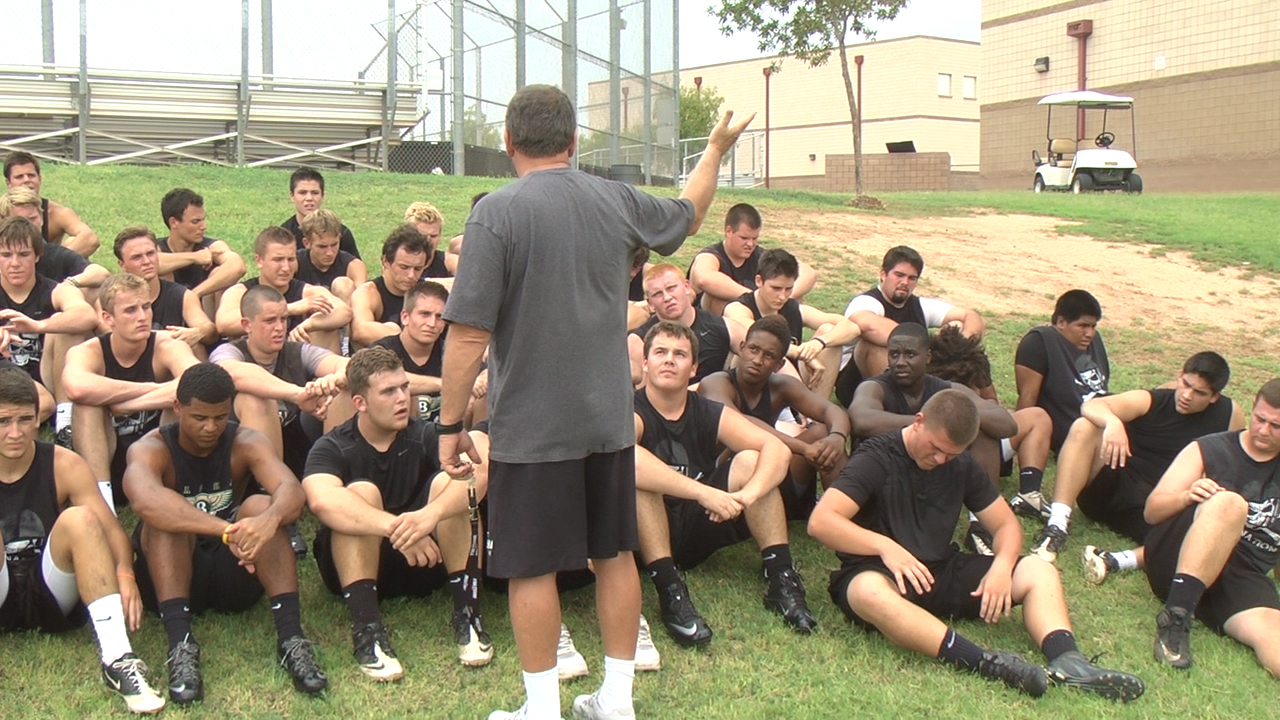 Basha quarterback Zach Werlinger believes so much in his football team that he’s set the bar for them as high as it can get for this upcoming season.

The Bears are coming off a 7-4 season which saw them fall short in the playoffs, falling to Desert Vista 35-28 last November.

Basha is returning 14 starters this year, and judging by the way his players are taking charge of their own destinies with their committment to excellence, head coach Bernie Busken is excited to see what the upcoming season brings for his team.

This is a group of players that wouldn’t take any time off after the Desert Vista loss. Busken said his boys were right back to work the following week and wouldn’t take no for an answer.

“The level of concentration and the level of listening and following directions is absolutely outstanding,” Busken said. “I’m really proud of them.”

The Bears defense will have a different look and feel to it this coming season, for one reason: they’ll be able to run. That’s something they’ve not been able to do in previous years.

“We have depth that we haven’t had,” Busken said when mentioning the smorgasbord of talent he has on that side of the ball.

Busken threw out some numbers: Basha will have at least six cornerbacks, six safeties and no less than eight linebackers that can play and make considerable contributions to the team.

Having that many hungry players on one side of the ball will undoubtedly force all involved to step their individual games up.

“The level of effort has to be there, or someone’s going in for you,” Busken said.

On offense, Basha will be “physical” this year, something they’ve been aiming to do for a long time and something Busken believes they’ll accomplish, because they’ve got the right mindset to do it.

“Everybody knows we can throw the ball with anybody, but we’re gonna be physical and we’re gonna whip some people too,” Busken said.

In addition to being physical, Werlinger sees the Bears’ speed being another factor in their favor.

“We play fast [on the] run and pass,” Werlinger said. “We like to keep the defense on their toes and score a lot of points, that’s the goal, score every time we have the ball.”

Werlinger’s coming off a season which saw him complete almost 64-percent of his passes for 2,689 yards, 30 touchdowns and just 12 interceptions. Even with numbers like that, Werlinger’s determined to up his output in 2013.

“I think accuracy is always something you improve upon and arm strength,” Werlinger said. “Make smart decisions and not turn the ball over.”

Werlinger won’t have to do it all by his lonesome. In his backfield he has one of the top running backs in the state in Rajhan Meriwether, who’s also heading into his senior season.

Meriwether – who’s gotten looks from Arizona State, Arizona and the University of Colorado – had 1,151 yards rushing last season to go with 10 touchdowns. If you can believe this, Meriwether, despite those impressive numbers, didn’t know how to carry a football properly before the season began, which would explain his propensity to fumble the ball away a lot.

“I think it was [that] I really didn’t know how to hold onto the ball,” Meriwether said. “Now I know the ball is gold.”

During the offseason, Meriwether’s been working with his father, his coaches and teammates to make sure the fumbling problem doesn’t resurface this season, and if it does resurface, it comes at a much smaller rate.

Meriwether’s a dual-threat in the backfield, and the Bears are planning on taking full advantage of that, as they’re working him in at the slot receiver position in addition to his rushing duties.

That’s music to Werlinger’s ears because that’s one more solid target for him to get the ball to.

“It’s a big relief to lean back on the running,” Werlinger said. “Passing and doing it all yourself isn’t easy.”

“I’m very grateful to have a good running back like Rajhan that can take the load off of me.”