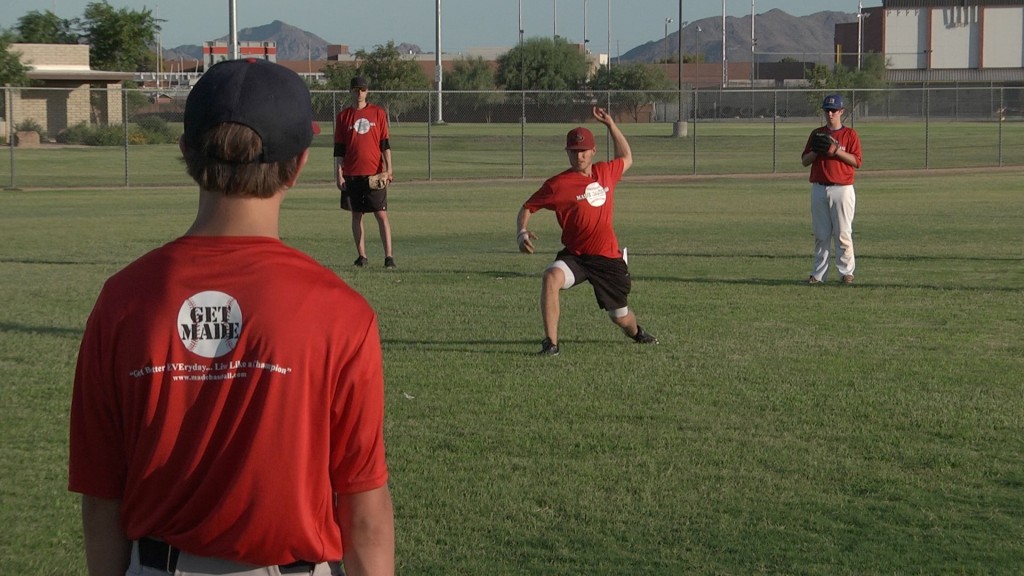 An Arizona baseball player conquered the mound after doctors said it wasn’t possible.

Isaac Hess may look like any normal 27-year-old, but eight years ago he was given the devastating news he needed a total hip replacement. Isaac is now in his 7th season of pitching professionally with an artificial hip.

Something only one other baseball player, Bo Jackson, has ever done.

Isaac Hess’s love for baseball started at an early age, but pain in his left hip made things a little difficult.

At the age of seven he was diagnosed with legg calve perthes disease which is a childhood condition that affects the hip. It occurs when the blood supply is temporarily interrupted to the ball part of the joint.

“As a child growing up he had a developmental problem with his hip, lost its blood supply and it just didn’t develop normally. So he went through childhood really, especially as a teenager with a hip that just wasn’t functionally normally or properly,” said Dr. Michael Wilmink, an Orthopaedic Surgeon at OrthoArizona, Arizona Orthopaedic Associates in Phoenix.

The condition is most common in boys ages four to eight.

“Doctors don’t know the exact cause of it. They believe it is from some sort of traumatic event when you’re young. So, I attest it back to this night I was playing football and stepped in a hole and really tweaked by ankle. I had to get a cast on my ankle. I sprang it really bad,” said Hess.

Isaac was only four-years-old at that time. Not knowing, he still stayed very active in school sports.

“By the time I was 19 it got to the point it was just like a football in there. There was no cartilage left. It was like just crackly,” said Hess.

But Isaac kept playing through the pain. It wasn’t until his sophomore year at Washington State University when a doctor wouldn’t clear him to play college baseball did Isaac finally slow down.

“I was just terrible at the crab walk and he pretty much looked at my x-rays and he’s like you’re not going to get cleared to play here. And you should get a hip replacement,” said Hess.

“When he came to see me about eight years ago with his mom, you know he’s this young kid who has got basically bone on bone arthritis in his hip. He’s got the hip of a 70-year-old,” said Wilmink.

Wilmink walked Isaac through his options, which included fusing his hip that would leave him with no motion, living with the pain or a total hip replacement.

“We are very hesitant about putting hip replacements in young patients because we know a hip is going to last 15 to 25 years and it has to be revised or redone,” said Wilmink.

In Isaac’s case, it was all about getting back in to the game.

“I put his hip in with the intention of getting rid of his pain and allowing him to walk and be mobile and have a normal life. I did not put his hip in so he could go play baseball… That was a decision he essentially made himself knowing that doing that higher level of activity could lead to the hip wearing out a little faster,” said Wilmink.

But Isaac was willing to take the chance.

Besides routinely practicing yoga, something he calls an EVEryday state of mind is what’s gotten him through.

“Every day is a word I try to live my life because I try to make every day count,” said Hess.

EVE in every day is capitalized because that was his mom’s name. Someone he says was one of the main reasons for his success on the field.

“My mom always supported me. And I mean when she passed away, she passed away right before I got my hip replacement. So we already had the plan of me coming back to play,” said Hess.

“Just look at him. He is a great example of somebody whose you know had all the cards stacked against him and overcome them and you know just so successful. I’m really proud of him what he has done and happy to be a part of it too,” said Wilmink.

“You can’t bridle his passion and his spirit for baseball. I mean it just, he loves it and he’s going to go out and do it and we’ve just been watching him closely,” said Wilmink.

“At the end of the day the way I go about the game, competing, teaching a bulldog spirit and knowing that you don’t have to necessarily be physically better than the other guy to beat them,” said Hess.

You can find out more about his mission to inspire today’s youth players by clicking here.

The Arizona Sports Hall of Fame honors its 2014 Inductees