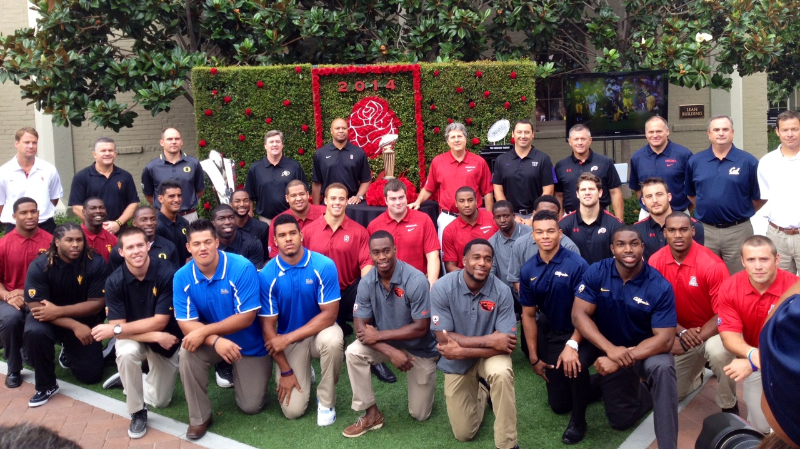 Friday was the annual Pac-12 Football Media Day from the Sony Studios here in Culver City near Los Angeles. It featured all 12 head coaches and one offensive and defensive player from each team. The event is growing in popularity each year with many local and national media members now attending.

1. There were no superstars who stole the show. Last year at Universal Studios the media circus followed USC quarterback Matt Barkley around like bees to honey. Whether doing interviews on radio row or simply trying to take a break for lunch there were reporters listening intently to every word and smart phones flashing pictures as he strolled from one venue to the next. Our spies tell us FOX’s Erin Andrews even snuck in a kiss on the cheek (how professional).

2. All eyes on ASU. A year ago the maroon and gold gang casually walked around the event while others flocked to Barkley, his new head coach with the Eagles Chip Kelly, Jim Mora and others. This year Todd Graham, Taylor Kelly and Will Sutton’s handlers were seen hastily ushering the trio from interview to interview throughout the day. The Sun Devils group press conference was one of the longest of the day. Big Will even got swarmed when he tried to catch a quick bite to eat.

3. Speaking of Sutton. For a guy who’s been reluctant to speak with the media his first three years in Tempe the senior All-American showed great personality at media day breaking out of his usually timid off-the-field demeanor and graciously answering questions (many of which were repeated). He joined Brad Cesmat on the show Friday afternoon. Kudos to ASU for putting their star on display with the miss on and the cameras rolling.

4. Shelley Smith failed her homework assignment.  Sources told me the usually reliable and always professional west coast-based ESPN field reporter asked Kelly how he felt about playing against Sutton this season. Then asked Sutton if he was excited to face the Oregon offense this year. The Devils don’t play the Ducks this fall. The only way Sutton and the Devils could get revenge on the Quack Attack would be in the Pac-12 Championship Game.

5. Jake Fischer has high expectations for the UofA defense, even if few others do. He had this to say to Pros2Preps.com’s Jared Cohen Friday afternoon. Pretty strong words for a defense that spent most of last season chasing the other team into the end zone.

6. If you thought Marcus Mariotta was good last year, just wait. Friday was my first opportunity to see the Ducks’ uber-talented sophomore quarterback in person. He does more than just look the part as he showed last season as a redshirt freshman. Mariotta is tall, athletic and handles himself with a combination of understood confidence and Hawaiian cool.

7. Marquise Lee isn’t shy on or off the field. The lightening-fast, play-making USC wide receiver hop-scotched from show-to-show Friday morning flashing a wide smile and usually spending more time on shows than his handler would have liked. It’s easy to see why. His dynamic personality was still on display even after his “600th interview” of the day as you can hear from yourself when he joined Pros2Preps.

8. Kelly thinking about the future. As previously mentioned it’s amazing what a year makes for the Devils junior quarterback. Last year an unknown, this summer one of the top returning signal-callers in the league. Kelly, who’s scheduled to graduate in December, said he’s already thought about the possibly skipping his senior season if he builds and improves on his 2012 resume. Stay tuned on that.

9. The conference is filled with bright, colorful head coaches. Pretty tough to match the Pac-12’s unique personalities from Washington State’s quirky Mike Leach to the energy of UCLA’s Jim Mora, JR to Stanford’s well-spoken David Shaw. Not to mention the always honest and insightful Mike Riley from Oregon State and the two in-state coaches who rarely disappoint.

10. Commissioner Larry Scott and the people at the Pac-12 do it right. Another year, another great experience in a unique setting for media day. I continue to be blown away and impressed with the organization and the fluidity from Dave Hirsch and his media relations staff. The free shuttle from the media hotel to the event and then back to the hotel and airport made transportation easy for reporters in from out of town. Coordinating and executing a growing event like this is never an easy chore.