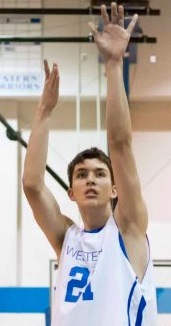 Dan Majerle and the ‘Lopes have snatched up some pretty strong low-post talent out of the state of Michigan, landing 6-11 forward Miroslav Jaksic.

Jaksic is from Walled Lake, Mich., and is a graduate of Walled Lake Western High School. He was born in Belgrade, Serbia and grew up in Windsor, Ontario, Canada.

“The coaching staff at GCU really welcomed my family and me from the onset,” said Jaksic. “I feel that we can accomplish a lot in my time here and it was the best situation for me. I’m excited to get going with the team. It already feels like a family.”

In 2013, Jaksic was the top-ranked center and fifth-ranked player in the state of Michigan. He earned All-State honors after averaging 18 points and 12 rebounds in a season that saw his team go 14-7.

Before his arrival in Michigan, Jaksic played at W.F. Herman Secondary School in Windsor, Ontario, Canada. In 2010, he averaged a double double (10 pts, 10 rebs).

Jaksic got a bronze medal in 2011, while representing Team Canada at the U-16 Americas Championships.

“Being able to coach a player like Miro is why I wanted to coach in the first place,” said Majerle. “He is supremely talented with a high ceiling as far as potential. I look forward to working with him throughout his career as an Antelope. This is truly a momentous day for GCU basketball and this program to be able to sign an athlete of Miro’s stature.”