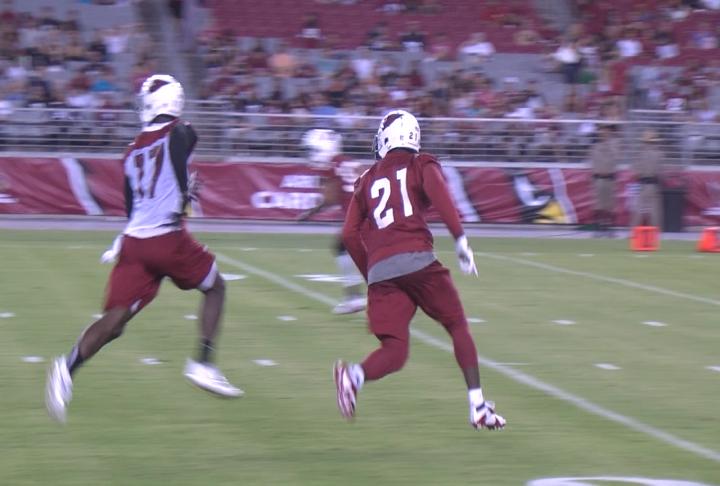 Cardinal fans in the Valley will get to see a lot of their beloved team in the coming weeks and months, after Tuesday’s announcement that the team will be holding all their public training camp practices at University of Phoenix Stadium.

All the other logistics surrounding camp have to be worked out between the team and the city of Glendale, Ariz., but one thing’s definite: the team won’t be in back Flagstaff, Ariz., at least for the immediate future.

“I don’t worry about that stuff,” Arians said. “That’s somebody else’s job. We’ll report to one of them [hotels] somewhere close hopefully.”

On the heels of that news, the team held it’s first public workout at the Stadium on Tuesday, as part of it’s Fan Fest, and the fans were out in full force.

Head coach Bruce Arians was blown away by the amount of excitement in the building coming from the fans alone. To confirm the location of training camp was just the icing on the cake.

It was quite a spirited practice too. All the minicamps (both rookie and team) and OTA sessions at the Tempe facility were high-powered and intense, so there’s was no reason to think Tuesday’s practice would be any different.

“[It was] a little too much contact out there for my liking, but I knew it would happen,” Arians said. “It always does when the fans come around.”

From the second Arians was introduced as head coach of the Cardinals, the vertical-passing system has been the big talk in Tempe and in Glendale, and it was most definitely on display on Tuesday night.

The Cardinal quarterbacks weren’t stubborn with the short, intermediate and long passes to their backs and receivers, to the delight of the thousands and thousands in the stands that were hanging on every move the players made.

“That was our normal reads,” Arians said. “[I] actually had a few more that we actually didn’t throw downfield. I would’ve liked to [have] seen them go downfield more.”

Arians liked what he saw from his defense as well. He said they were “hummin’.”

Before you know it, University of Phoenix Stadium will be hosting those training camp practices, which means one thing: the preseason and regular season aren’t too far behind.

In anticipation of the practices, Arians said a 50-yard AstroTurf field will be installed alongside the playing surface, that way they can get all the hard work done on it instead of the game field.

“The way it’s scheduled, every seven days we have to have a day off now in the CBA, so we’ll be able to get the grass back, and it’ll be great for the fans,” Arians said.

The team “won’t miss any days work,” according to Arians when the time draws near for camp.

They’re allotted two extra practices at their Tempe facility prior to training camp, so they’ll make the best of those by having the quarterbacks, the rookies and those players on injured reserve who are eligible to come back early be a part of those practices before the team moves their base of operations to Glendale, Ariz.

Arians looking for “diamond in the rough” during OTAs