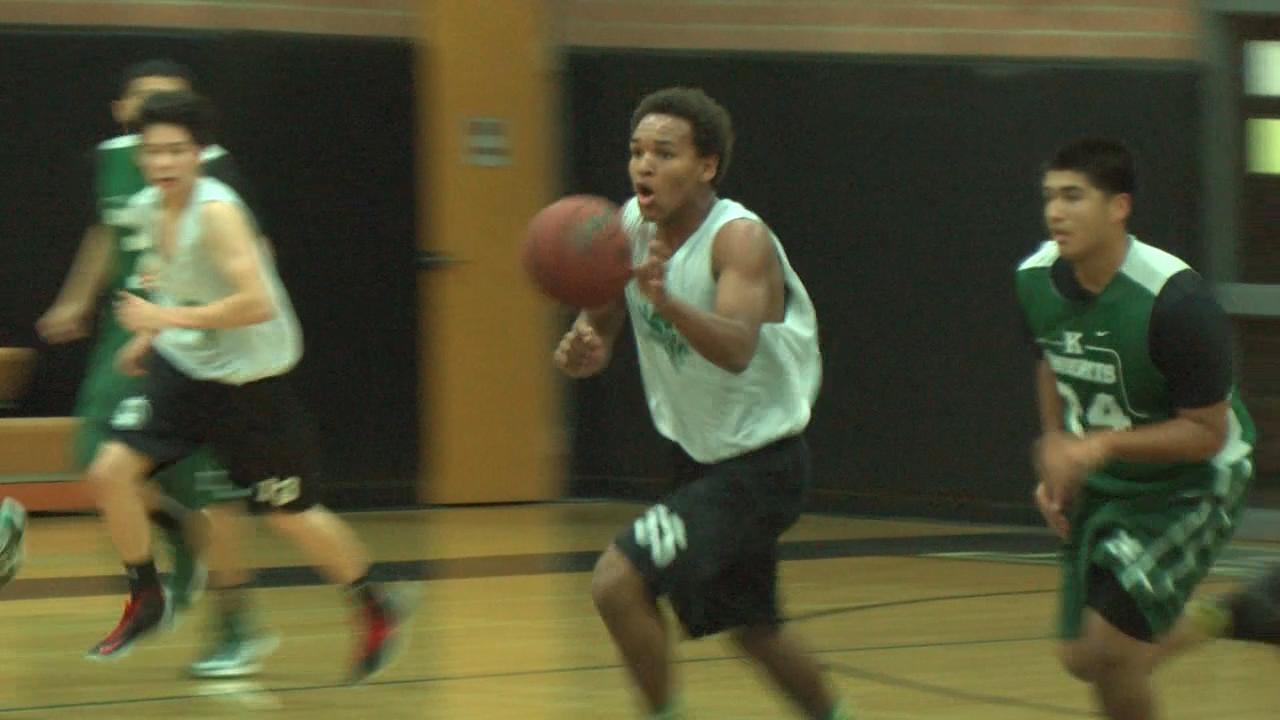 There wasn’t enough competition down in Tucson, Ariz., for Sammy Barnes-Thompkins, so he hit the road for Sunnyslope High School and linked up with his AAU partner, Michael Humphrey, and they’re looking to do damage this season for the Vikings.

Barnes-Thompkins attended Marana Mountain View, and according to him, he literally played above his competitors. His 6’2″, 185 pound frame was too much for the opposition to handle.

“With rebounds, I almost averaged a double-double every game,” Barnes-Thompkins said. “Being so big and I could jump, everyone in Tucson’s small and everything, so I [would] just jump over them.”

Barnes-Thompkins is an unusual hybrid type player. He’s a combo point/shooting guard in a power forward’s body. Being the size he is and the strength he possesses at the combo position gives him many advantages.

“When they put a bigger [player] on me, I can just bring them out and go to work on him and take it to the bucket, get a ‘And One,’ or whatever you have to do,” Barnes-Thompkins said.

Gary Thompkins – Sammy’s father – played point guard at Iowa State and had a brief stint in the NBA with the Portland TrailBlazers. Barnes-Thompkins learned everything he knows from his dad.

“When I was younger, I used to run around with him everywhere, he taught me everything,” Barnes-Thompkins said. “I used to watch him hoop with his friends and my uncle and everybody, so my game is kinda like an old school game, it’s not like the high school game.”

So far, so good for Barnes-Thompkins at Sunnyslope. He’s getting along with his teammates, he’s got Humphrey down in the blocks to feed it to, and he likes the determination his guys have so far.

“They can do everything,” Barnes-Thompkins said. “You got hustlers out there, you got bigs, they can shoot the ball, and the best thing about them is they don’t give up on anything. We’ll be in a slump and they’ll be like ‘Come on, we’re good.'”

“They don’t get down like other teams,” Barnes-Thompkins said. “Other teams will miss a layup or something, and their whole body language goes down. They just stay up and they’re all preppy and they work hard 24/7. There’s nothing better than that.”

The constant “up” motion the Vikings team has is having a positive effect on Barnes-Thompkins, as he’s taking a good look at himself and what aspects of his game he needs to tighten up if he wants to continue to run with the “big boys.”

“I’m nowhere near being how good I could be if I keep working,” Barnes-Thompkins said. “Right now, I’m trying to work on my handles. When I’m out there, try and pad them a little more.”

As good a rebounder as he was down in Tucson, Barnes-Thompkins wants to be an even more effective player on the boards.

“Once you get a rebound, and you’re a guard, you can just grab your ‘board and go down the court. You’re taking it 2-on-1 or 3-on-2 and that gives you an advantage to score the basketball better.”

“I wouldn’t necessarily say [a] weakness, I’d just say [it’s] something to get better at to improve my game.”