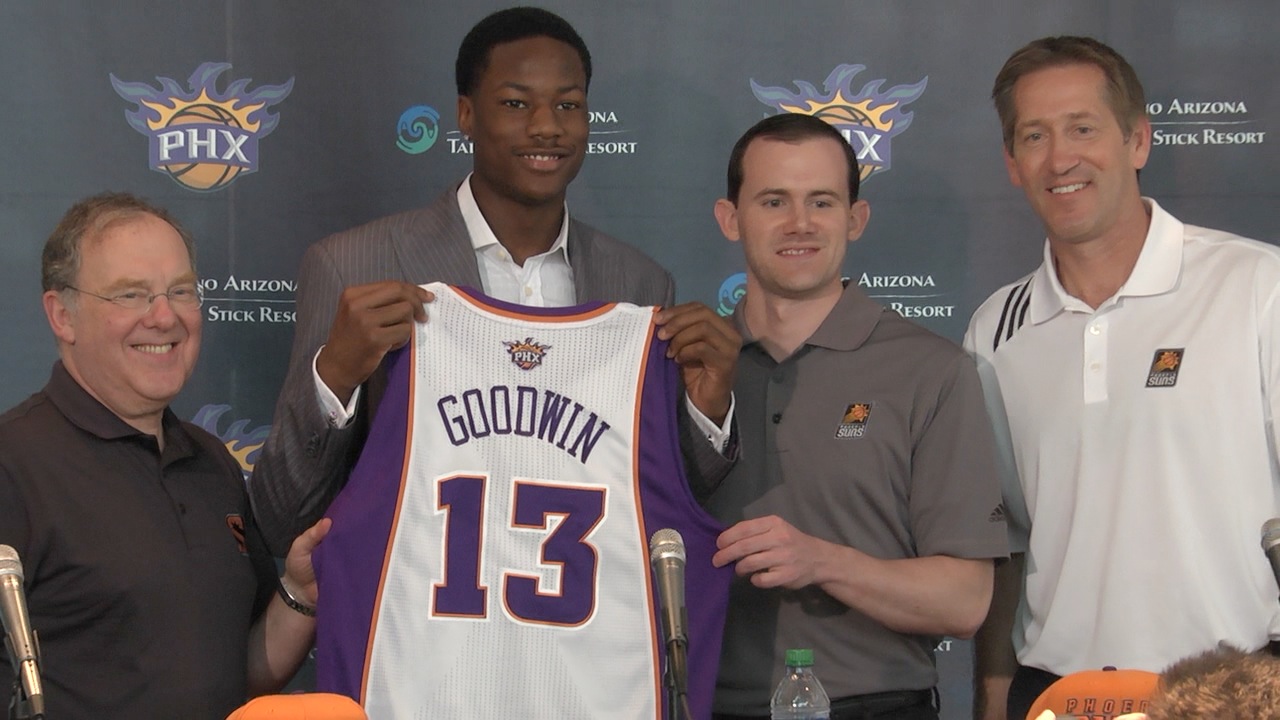 Archie Goodwin has been silencing nay-sayers his entire life despite the fact that he has been one of the best basketball players in his age group for most of his life.

He had people unhappy about leaving his home state of Arkansas for the University of Kentucky and then as the youngest person in the 2013 NBA Draft, Goodwin once again had people questioning him as to whether or not he was ready for the NBA after one season at Kentucky. Once again, Goodwin proved everyone wrong by impressing the Phoenix Suns enough to not only have him out to Phoenix for pre-draft workouts twice, but also trading up in the draft to ensure that they landed him.

“I want to thank my family for supporting me through everything,” Goodwin said at the US Airways Center on Friday. “It’s been a long journey to get here with all the things I’ve had to go through and those guys have had my back the whole time. So I just want to thank them.”

“Archie is a guy we had rated very high on our draft board,” mentioned Suns general manager Ryan McDonough. “We frankly didn’t think he would be there for us, we were picking at the very end of the first round. We were trying like heck to get a pick up higher to take him.”

Coming out of high school, the native of Little Rock, Arkansas was named Mr. Basketball in the state and was named an All-American. In one season at Kentucky, he was one of the teams’ primary ball handlers leading the Wildcats in scoring at just over 14 a game and also led the Southeastern Conference in free throw attempts.

“We like everything about him,” added McDonough. “As a player and as a person.”

For the Suns, Goodwin was rated much higher on their draft board than where they were slated to pick in the first round. When he was still around late in the first round, that is the reason the Suns traded up one slot to ensure they landed him. There were notions that Oklahoma City was keying in on Goodwin and they could of traded up from the 32nd pick in the second round to grab him before the Suns picked at 30.

McDonough confirmed in Goodwin’s introductory press conference that other teams were very high on the 18 year-old.

“For us there was a significant drop off from Archie to the next player on our list so we didn’t want to mess around and run the risk of him not being there when we were picking,” McDonough mentioned. “Right after we got him my phone started blowing up with a lot of calls and texts from other teams saying ‘dangit that was our guy!’”

Goodwin is a scoring guard who likes to attack the rim. His old coach John Calipari stated that he reminds him a lot of Thunder guard Russell Westbrook. Shooting from the outside consistently but a former shooting coach and now Suns head coach Jeff Hornacek does not see that being a problem just from witnessing Goodwin’s work ethic in workouts.
“Archie has shown us that he is going to work hard,” said Suns head coach Jeff Hornacek. “We can give him those (shooting) drills and we know he is going to go hard and that is going to make him better.”

“My competitive edge really sets me apart,” explained Goodwin. “But I still have a lot of room to grow. I’m only 18 years-old and I can get a lot more consistent in shooting and dribbling and getting an overall better IQ of the game.”

Free agency is next on the agenda for the Suns which kicks off on July 1st.