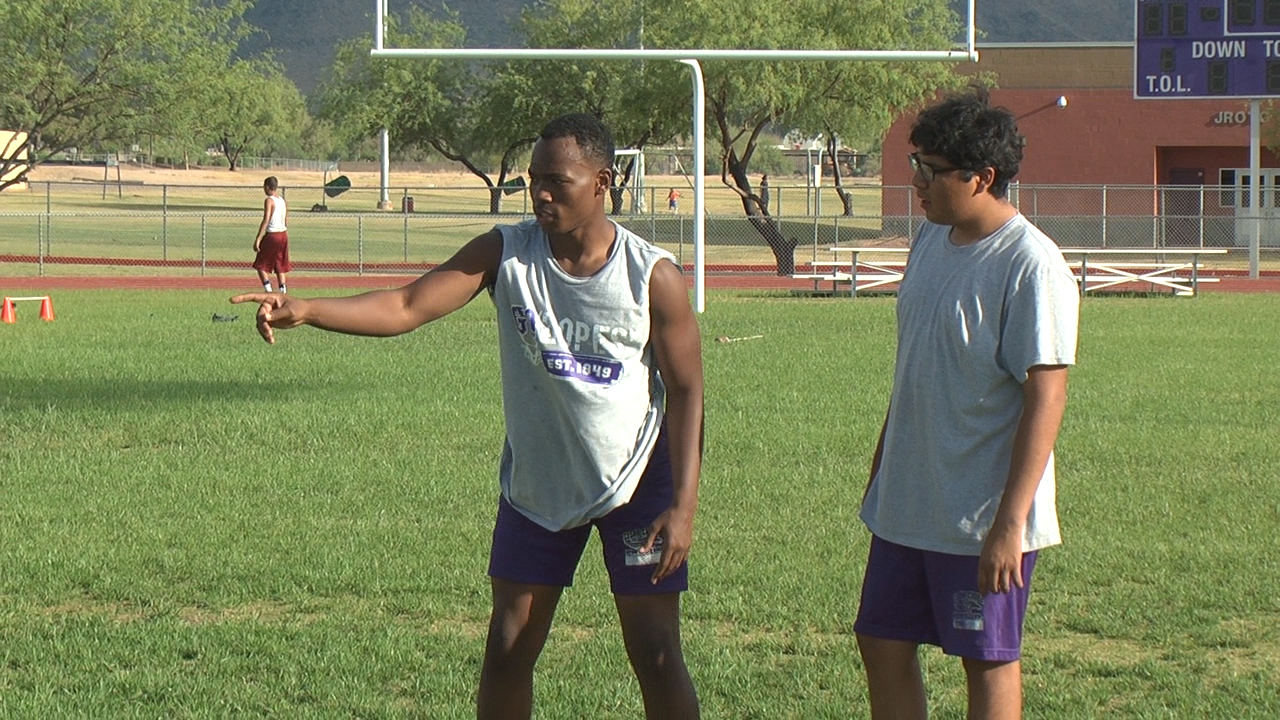 President Barack Obama made history, becoming the first African-American president in the history of the United States.

Olajuwon Cunningham made history as well at Cesar Chavez High School. Cunningham was voted in as the first African-American student body president in the school’s history.

When I asked him if he felt any pressure at all being the first of his kind to hold that position, he was quite cool in his response.

Cunningham – or OJ as he likes to be called – was elected president by a group of his peers, including most of the players on the football team.

“The leader that I am around school, everybody knows me, I’m doing different things, community service [and] things like that,” Cunningham said. “I got all the votes and they decided I’m the best leader out of of the people that were running with me.”

OJ has a presidential staff who attends to his every need, just like Obama has. He has a vice president, a recorder, and a representative.

What are some of the duties of a student body president?

Having this level of responsibility has a direct effect on what OJ does on the football field. If you look at the way he plays during practice and how he’s constantly teaching the younger linebackers on the right way to play the game, you can see it’s having a positive effect on OJ.

“It’s definitely on the same level, you can definitely compare the two,” Cunningham said. “With that [student body presidency], I’m leading the whole school and I’m leading my team on the field, especially my defense out there.”

“It makes me feel pretty good [to] have some confidence in my leadership, and it let’s me know I am a leader,” Cunningham said.

In-between serving as student body president and his duties on the Chavez football team, Cunningham finds time to do community service, to reach out and bless others who are in need of a blessing.

OJ serves food at St. Vincent De Paul, he participates in “Smiles for Christmas” at St. Mary’s High School and he also takes part in an event called “Relay For Life,” which raises money to help in cancer research.

“Doing community service really hits my heart, because you can make an impact on those lives that might be in a really rough situation,” Cunningham said. “You can give them those words of inspiration that will drive them to help get out of their rough situation.”

“It can really humble you, talking to those people that you’re serving dinner to, from the stories they tell you about their daily life,” Cunningham said. “It gives me an appreciation for all the things God has blessed me with.”

OJ’s head coach, James Rattay, served as student council advisor and as head football coach at another school before coming to run the Chavez football program.

Rattay said at that school, they had a lot of males and males of color running the student council and the student body, and that garnered a lot of jealousy from outsiders who were wondering what the school was trying to do having minorities in positions of power.

But times have changed and it’s a new day when it comes to those power positions. It used to be female dominated, but it’s shifting over toward young men running things, like OJ.

“That puts a real smile on my face, just to think of OJ,” Rattay said. “Great leader, great role model on our campus, and he’s done a lot for our school.”

“That’s what’s special about OJ, he’s a guy that’s kind of like dropping a rock into a pond, he’s just rippled through all aspects of our school and our community,” Rattay said.