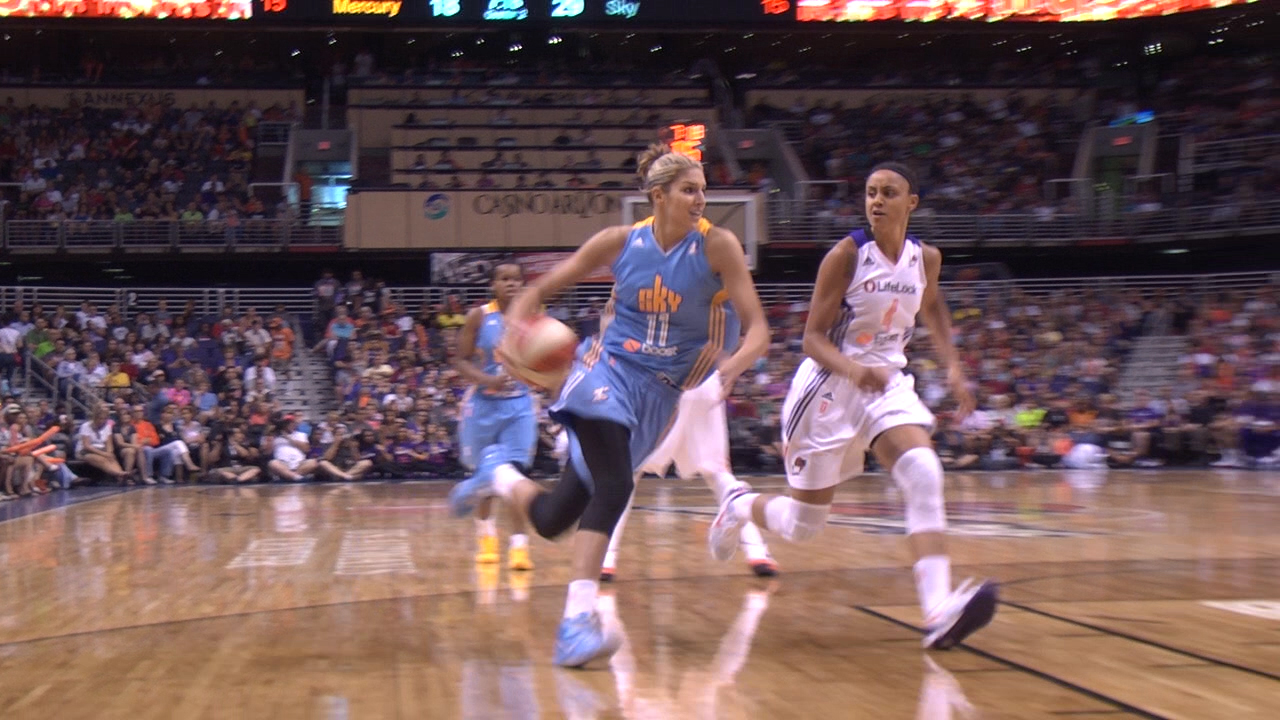 The Phoenix Mercury had no answer for Chicago Sky guard Epiphanny Prince and No. 2 pick Elena Delle Donne in their home/season opener on Monday.

Prince and Delle Donne combined for 48 points, including going 8-for-12 from three-point range, as the Sky pummeled the Mercury 102-80, before a sellout crowd of 10,200 at U.S. Airways Center.

For the game, Chicago shot 50.7 percent from the field, including 8-of-16 from downtown.

“Today was absolutely amazing, we came here to get a win and that’s what we’re leaving with,” Delle Donne said. “I feel like we were able to execute our game plan well and it’s great to get out of here with a W.”

“We had the ball, the passes went very well, we had assists, we had rebounds, we just clicked on everything,” Prince said. “We played great defense and it was a great game.”

The Sky scored 39 points in the second quarter – their highest scoring quarter in the game – connecting on five of their seven three-points shots. They shot almost 71-percent in that quarter.

Phoenix played much better in the second half. They outscored the Sky 48-46, but the damage had already been done in the first half and it was too much of a deficit for the Mercury to try and makeup.

“We gave up way too many points, and it’s hard to win that game without getting stops,” head coach Corey Gaines said. “We don’t get stops, we take the ball out of bounds, they get fouled, we walk the ball up the court, the defense is set, it’s like a little hamster wheel, it gets worse and worse.”

Guard Diana Taurasi led the Mercury in scoring with 18. In the locker room afterwards, she didn’t sugar coat it when it came to the loss.

“We had a lot of issues today, we really couldn’t get much done on either side of the ball,” Taurasi said. “They came in here and handed us a pretty good kicking.”

“We couldn’t find that rhythm on either end,” Taurasi said. “That starts with me all the way down to people who play two minutes, we have to make a more team-concerted effort to make sure that doesn’t happen again.”

Things started off pretty well for the Mercury and No. 1 pick Brittney Griner. 28 seconds into the game she scored her first basket of her WNBA career and the first points of the Mercury season.

Then came foul trouble which really hampered her game in the first half. Griner got three fouls in the first period, forcing Gaines to sit her for the entire second quarter, or risk her getting a fourth foul or worse if he left her in.

Griner came back and played well in the second half. She got the first two dunks of her career, which of course got the crowd in a frenzy. She finished with 18 points, eight rebounds, four blocks and the two dunks.

However, it was her extended time on the bench due to foul trouble which irritated her.

“It was very frustrating,” Griner said. “I sat on the bench, early fouls, being stupid, leaving the floor. Stuff I should know better than doing.”

Perhaps it was all the hype of it being her first game as a member of the Mercury, the championship expectations, the No. 1 draft pick hoopla and the No. 1 pick vs. No. 2 pick talk that got Griner a bit too excited for the game that got her in early trouble.

“I guess so,” Griner said. “I guess I was a little too pumped, wanting to block everything, leaving the floor [and] not thinking, but next game I’ll lock in and remember that.”

That next game being in the Pacific Northwest against the Seattle Storm on Sunday, June 2 at 6 p.m. Arizona time.

The ups and downs of Brittney Griner’s first WNBA game