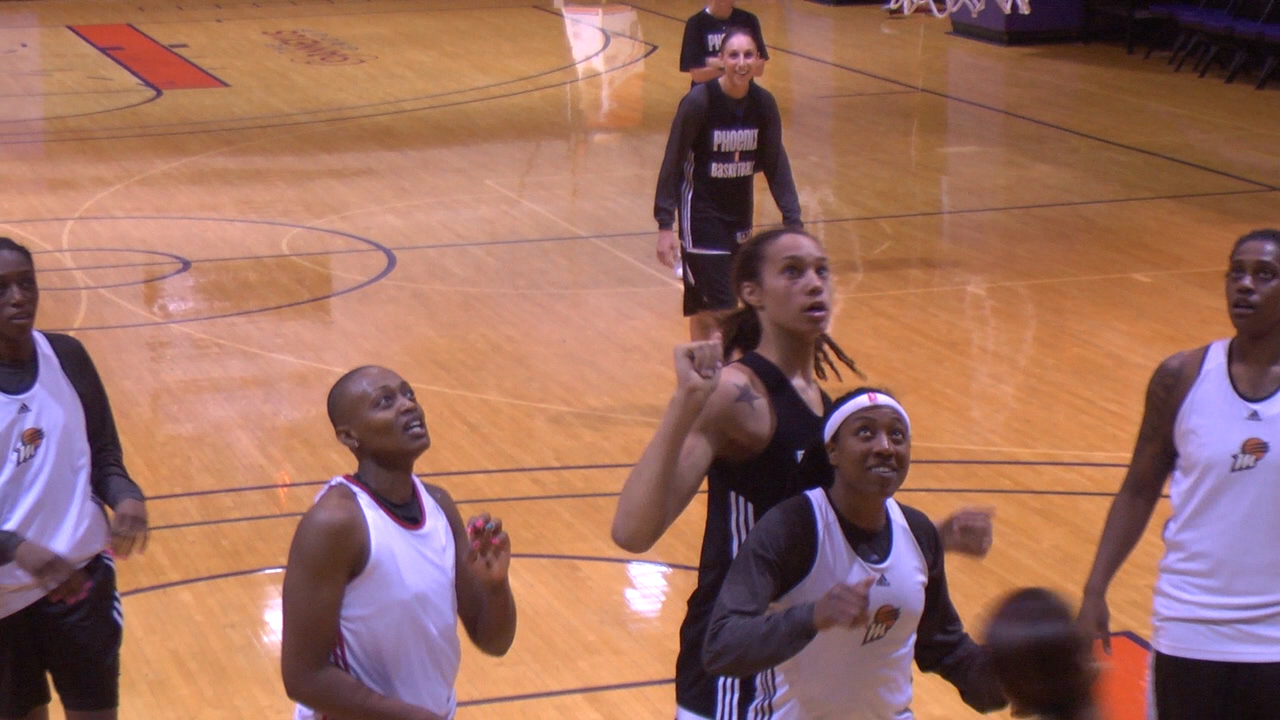 The Mercury are less than a week away from hosting second overall pick Elena Delle Donne and the Chicago Sky in both team’s season openers.

It’s a much anticipated matchup between No.1 draft pick Brittney Griner and Donne. It’s so anticipated a matchup, that it’s being played on Memorial Day and it’s being televised nationally on ESPN2.

As the team takes part in their final few practices before the Sky come to downtown Phoenix, head coach Corey Gaines is quite happy with where his team is at right now.

“Yeah, we’re cutting down, we’re gelling, players are starting to figure out their roles and exactly what we need them to do,” Gaines said. “We’re moving on, we’re adding stuff, adding different schemes, adding more offensive sets and we’ll be in a flow.”

On top of the team coming together collectively, Gaines can see his down-low force, Griner, gaining steam as well, as she heads toward the end of her first training camp as a member of the Mercury.

“She’s coming along nicely,” Gaines said. “She’s feeling out the game, of course there’s a learning scale for all rookies. Maybe for her it won’t be as long or as big, but she’s definitely taking it step-by-step and learning every day.”

Griner is glad she’s coming toward the end of camp because, in her words, she can “breathe now,” and she’s getting the plays and terminology down even quicker than she did when she first arrived.

“I’m starting to get the feel of the game and it’s flowing for me,” Griner said. “I definitely see improvements, I see room for more improvements and I’m catching on.”

Griner says it also helps that she has three other “coaches” on the court – Diana Taurasi, DeWanna Bonner and Candice Dupree – to give her guidance and direction, along with Gaines and the rest of his staff.

The Sky will come in with a true test for Griner in the post in 6-6 center Sylvia Fowles. Last season Fowles averaged 16.2 points per game and 10.4 rebounds per game.

In fact, Fowles’ rebounding numbers have steadily increased since she came in the league back in 2008.

Griner says she’s gotten plenty of work during the practices to get her ready for what’s to come against Fowles.

“Just going hard everyday in practice,” Griner said. “KT [center Krystal Thomas] does a great job of getting me ready. You know, everybody does.”

“Going up against Sylvia, I have height, length,” Griner said. “I’m looking forward to it.”

With so much talent running through this organization, no wonder 33-percent of the league’s general managers feel Phoenix will bring home their third WNBA championship this year.

Diana Taurasi sounded a little cryptic in her response when I asked her how the team goes about their daily operation when all this championship chatter is surrounding them.

“I guess it’s a nice compliment, but it doesn’t mean anything,” Taurasi said. “I’d rather have all three-thirds know who won at the end of the year.”

The ups and downs of Brittney Griner’s first WNBA game