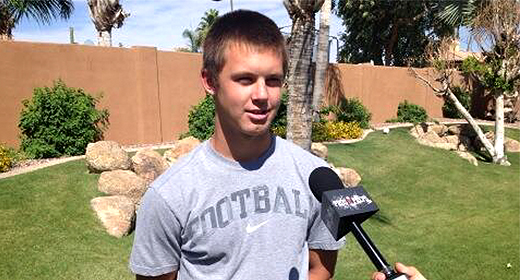 The hardest decision in Kyle Allen’s young life may have gotten a little easier Tuesday afternoon when he announced his final five college coaches on twitter.

The 6’3, 195-pound senior from Desert Mountain High School in Scottsdale is considered by many the top 2014 quarterback recruit in the nation. He’s received over 20 offers entering his final prep season this fall.

Ohio State has a connection to Allen through head coach Urban Meyer who forged a relationship with Kyle’s father Mike many years ago when Meyer was at the University of Florida.

“I had interest in them all along as Coach Meyer became the coach there,” he explained. “My dad had a relationship with him through the [Tostitos] Fiesta Bowl.”

Another heavyweight with more than a puncher’s chance is Notre Dame who happens to also be recruiting Allen’s teammate and close friend wide receiver Mark Andrews. Andrews sold Allen on the Irish during a recent visit.

“Obviously it’s a great school education-wise,” Allen said of the Fighting Irish. “[Notre Dame] is a national contender on the football field, too so it’s a great combination.”

Allen pointed out the fantastic facility upgrades at both A&M and Oklahoma State as well each schools player-friendly head coaches in Kevin Sumlin and Mike Gundy.

The only Pac-12 school in the mix is UCLA where former Arizona State assistant Noel Mazzone has been hand-picking some of the state’s top talent recently and hopes to add Allen to his resume.

For now it’s back to summer workouts in north Scottsdale where Allen looks to sharpen his footwork and mechanics before practice officially starts later this summer.

He’s planning a future trip to South Bend to visit Notre Dame. He’s made official trips to his other four finalists.