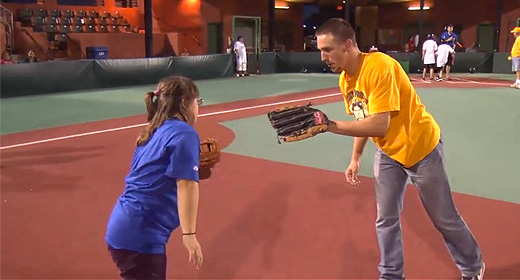 ‘Buddy Ball’ is a sports program over in the city of Surprise, where volunteers come out and play baseball with special needs children. One of the volunteers is Liberty linebacker Zach Neill.

Neill has been active in Buddy Ball for the past five years. He was introduced to ‘Buddy Ball’ by one of his coach’s sons who had been involved in the program

Neill says Buddy Ball has been a major influence on his life from Day One.

“They’re the reason I’m out here,” Neill said when speaking of the kids he plays with. “Every time I leave, my life just got better all of a sudden. Just coming out here, seeing these kids pushing through all of the things they have going on in their lives.”

“It’s a great motivation for me,” Neill said. “When I’m getting tired, I feel like ‘Oh, I can’t do this,’ I just think back to Buddy Ball and it gets me through.”

Neill has been a blessing to many people in his time on this Earth, including his parents in more ways than one. He was born two months premature, and the doctors gave him little to no chance of surviving.

As you can understand, there were a lot of lean days for the Neill family early on after Zach was born, but they persevered and they are where they are because of their belief in each other and in God.

To add even more hardship to the Neill family, while Zach’s mother Crystal was pregnant with him, she was diagnosed with ovarian cancer. Had she not been carrying Zach at the time, she may have not found out about the disease until it was too late.. Thankfully however, that didn’t happen and the doctors were able to successfully combat it.

“I had no symptoms,” Crystal Neill said. “There’s really no way to test for ovarian cancer unfortunately, it’s a silent killer and it’s a scary thing.”

Seeing her premature son struggle and fight to not give up on his life gave Crystal the motivation she needed as well to keep fighting her fight. “Here I had a surgery I had to face and overcome a disease that is life-threatening, and I knew I needed to live for him, and he lives for me”.

“He’s always there for me,” Crystal said. “He’s a kid that’s like, when I’m down, he’ll see that and come up to me, pat me on the back and say, ‘Mom, get your spirits up, you’ve got this,’ and he’s done this since the day he was born.”

Zack says he wouldn’t trade this experience he has with the kids for anything in the world.

To learn more about ‘Buddy Ball’ and the City of Suprise’s adaptive recreation programs, visit their website here.