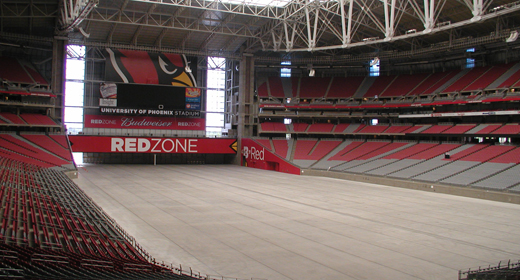 The Arizona Wildcats and BYU Cougars announced vie Google Hangout on Friday that they have agreed to play a three game series in 2016, 2018 and 2020.

In 2016, the game will be played at the University of Phoenix Stadium in Glendale. The next two will be normal home and away games as 2018 will be in Provo, Utah and 2020 will be in Tucson.

“Our Phoenix-area fan base is an important part of our Arizona Athletics community,” athletics director Greg Byrne said. “We’re excited to announce our series with BYU and especially playing the first game at University of Phoenix Stadium in Glendale in 2016. These three games will provide the coaches, student-athletes and fans of both Arizona and BYU with a great regional match-up. I look forward to working with BYU Athletics Director Tom Holmoe to further promote this series and providing an exciting atmosphere for our fans.”

“This is a great regional series and a unique opportunity for our large fan base in Arizona to see us play,” added BYU director of athletics Tom Holmoe. “Arizona has a great football tradition and University of Phoenix Stadium is an incredible NFL venue. I believe the venue and location will attract a lot of our fans in support of the Cougars.”

Rich Rodriguez and his team were up in Phoenix for the second consecutive year to hold a spring scrimmage in front of Wildcats fans in the valley. Rodriguez mentioned that he loves what they have started with that and hope to continue doing so “as long as they will have us.” The announcement of a game in the Phoenix area has Rodriguez that much more excited.

“We’re very excited to have a game in Phoenix,” head coach Rich Rodriguez mentioned. “We have a lot of Arizona fans and supporters in the Valley and this is great for them. I also think this is a great series with BYU, a program with a lot of tradition. I think this match-up will have regional and national interest.”

Helping in putting on the game in Glendale will be the Fiesta Bowl. They play their much anticipated bowl matchup every January at the University of Phoenix Statdium and will contribute their experience at that venue to this matchup.

“The Fiesta Bowl strives to contribute to the game of college football, and this game offers us the perfect opportunity to do so,” Fiesta Bowl Executive Director Robert Shelton said. “This aligns with our mission to promote the state of Arizona and serve as welcoming hosts.”

Arizona and BYU have met 22 times in history. The Wildcats have won two of the last three meetings, most recently a 31-21 win over the Cougars at the Las Vegas Bowl in 2008. It was Arizona’s first Bowl appearance in a decade.

The game in Phoenix in 2016 will air live on the Pac-12 family of networks. Dates, times and the remainder of the TV coverage information for the Arizona-BYU series will be announced at a later date.

In the mean time, the Wildcats hold their annual spring game on Saturday which will be played at Sancet Stadium and will air on the Pac-12 Networks at 1pm. Plus they will unveil the new Lowell-Stevens Football Facility at the north endzone of Arizona Stadium.

“I don’t have a lot of expectations from a scoring standpoint. What I want to see is effort and execution,” said Rich Rodriguez about the spring game. “I hope the guys will bring intensity…We told the guys we need to see it from all of them all the time. I think they’ll bring it Saturday because it’ll be a nice day and a nice crowd.”