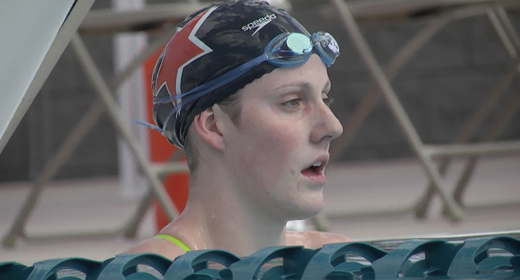 The United States fell in love with their new swimming sensation Missy Franklin in the 2012 Olympic Games in London last summer. The then 17 year-old from Colorado won five medals in six events including gold medals in the 100m backstroke, 4×200 medley relay, 200m backstroke and 4×100 medley relay.

Franklin was honored in Arizona back in December/January as she was named the Fiesta Bowl Parade’s Grand Marshall.

Now she is back in the valley this week as she is competing in the Arena Grand Prix at Mesa going on Thursday through Friday from the Skyline Aquatic Center.
“I am here to race, that’s all I am here to do,” said Franklin after her practice workout on Wednesday. “No time expectations or anything like that. I think it is going to be really fun…I am excited to get out here and race some long course.”

Franklin will be competing for her club team the Colorado All-Stars. The Grand Prix is made up of more than 20 other former Olympians that will be competing and it is what Franklin calls an excellent opportunity for her.

“For the meet itself it’s just awesome to see where you’re at and what you need to work on,” Franklin explained. “Especially with all of the college swimmers coming back now so I think the competition is going to be very tough.

While there is a high level of competition involved in the event, it is also the gathering of friends which Franklin likes most about being here.

“I joke that I think Grand Prix’s are more about social fun than actually going to swim because I just get so excited to see all of my teammates again,” Franklin joked. “It’s so fun to see them and catch up and see what everyone has been doing because you miss them so much because you spend 24/7 together for week’s at a time and then you don’t see each other for a couple of months.”

Some of the other big names out at the Grand Prix at Mesa this week that Franklin is excited to see include Ryan Lochte and local star Breeja Larson who grew up in Mesa before attending Texas A&M.

Franklin herself as continued success since leaving the London games. She helped her high school swim team at Regis Jesuit to a state championship which was just as rewarding and emotional to her as competing in the Olympics was. She will graduate high school in May before taking her great swimming talent to Cal Berkley next fall to start the next chapter of her great career.